To say the U.S. housing market is on fire is an understatement these days. National property broker Redfin is reporting this week that the national median home-sale price in the U.S. hit a record high of $353,000 in March 2021, up 17% from 2020 and a record high rate of growth.

The U.S. housing market set several other records in March 2021, even considering the fact that year-over-year comparisons are now looking at the start of the pandemic:

Year-over-year comparisons may more reflect the fact that in March 2020, stay-at-home-orders halted both home-buying and selling activity. They don't necessarily reflect how the housing market has changed over the past year.

"My family is looking for a home to buy in the Washington, D.C. area, so I know first-hand that the house hunt feels a lot like spinning the roulette wheel each week," said Redfin Lead Economist Taylor Marr. "So why would we buy into the toughest market I've ever seen? Despite the intense competition and high prices we face, I still see more big gains to be made in home equity. Fundamentals like low mortgage rates and high demand for housing are fueling the record-high price gains, so I don't believe that homes are overvalued. Waiting for the market to cool could take many months, and at that point we may have missed out on the opportunity to benefit from these super-low mortgage rates and price gains in the year ahead."

Median sale prices increased from a year earlier in all but two of the 85 largest metro areas Redfin tracks. The only places prices didn't increase were Honolulu, where they fell 4.7% from a year ago and San Francisco, where they were down 1.6%. The largest price increases were in Austin, TX (+28%), Fresno, CA (+23%) and North Port, FL (+23%), three popular destinations for newly-remote workers who have been leaving the most expensive metro areas during the pandemic in search of more affordable locales. 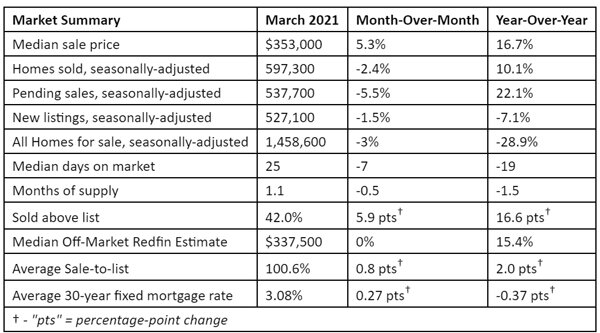 The number of homes sold in March was up from a year earlier in most of the 85 largest metro areas Redfin tracks, but 11 metros did see declines. The largest gains in sales were in New York (+58%), San Jose (+56%) and San Francisco (+55%). The metro areas where home sales fell the most were Rochester, NY (-9%), Grand Rapids, MI (-9%) and Dayton, OH (-7%). The number of homes for sale in all three of these metro areas has been falling by around 30% year over year for most of this year, so the drop in sales is likely due largely to a lack of supply.

Active listings--the count of all homes that were for sale at any time during the month--fell 29% year over year to their lowest level on record. This was the largest year-over-year drop on record and the 20th-straight month of declines.

The housing market was more competitive in March than any time since the start of Redfin's national housing data in 2012.

The typical home that sold in March went under contract in 25 days--19 days fewer than a year earlier and the fastest pace on record.

In March a record-high 42% of homes sold above list price, the largest share on record. If this measure follows the typical seasonal pattern, it may continue to hit new record highs in April, May and June.

The average sale-to-list price ratio exceeded 100% for the first time on record in March. This measure also typically peaks in June, so it may hit additional record highs for the next three months if the market does not cool down.