The U.S. median monthly rent was $1,472 in February, up from $1,438 a year earlier. This translates to more than $400 in additional yearly expenses for the typical renter. Rents have steadily recovered since a slowdown in the fall that saw the first annual price decreases in more than six years.

Annual rent growth accelerated from January rates in most large housing markets, with the biggest jumps coming in Portland -- a turnaround after six straight months of annual rent declines from July through December -- and Indianapolis.

The only two large housing markets where rent growth fell were Orlando and Pittsburgh. Despite that slowdown, both still saw higher-than-average growth, with Orlando rents growing faster than any other large metro area (7.0 percent).

New York renters have yet to see an effect from Amazon's decision to not build a new headquarters in Long Island City. Its rent prices, along with those in Washington, D.C., and Nashville, two markets where Amazon still intends to build large office spaces, have largely followed national trends since the November announcement.

"The rental market spent part of last year catching its breath after several years of breakneck growth," said Zillow economist Jeff Tucker. "Landlords are now coming to terms with the fact that rent cannot grow faster than income forever, and after that short correction we can expect a much more vanilla, slow-growth market going forward. As we enter the 2020s, the demand for rentals is projected to fall as many millennials move on to homeownership."

While rent price growth increased, national home value appreciation sagged to its lowest level since December 2017. The median U.S. home value is $226,300, a 7.2 percent increase from a year earlier. The cool down was felt most in San Jose, Calif., and San Francisco, though these remain the two priciest large markets in the country.

U.S. for-sale home inventory grew 1 percent year-over-year, an increase of 16,137 homes. This is the fifth month out of the past six in which inventory has increased on an annual basis, after declining for 44 straight months. Inventory picked up the most in San Jose, Seattle and Los Angeles, further signaling a cool down from the frenetic pace of the past year in major West Coast markets.

Mortgage rates listed on Zillow were mostly flat in February. Rates ended February at 4.16 percent, down one basis point from the start of the month. Zillow's real-time mortgage rates are based on thousands of custom mortgage quotes submitted daily to anonymous borrowers on the Zillow Mortgages site and reflect the most recent changes in the market. 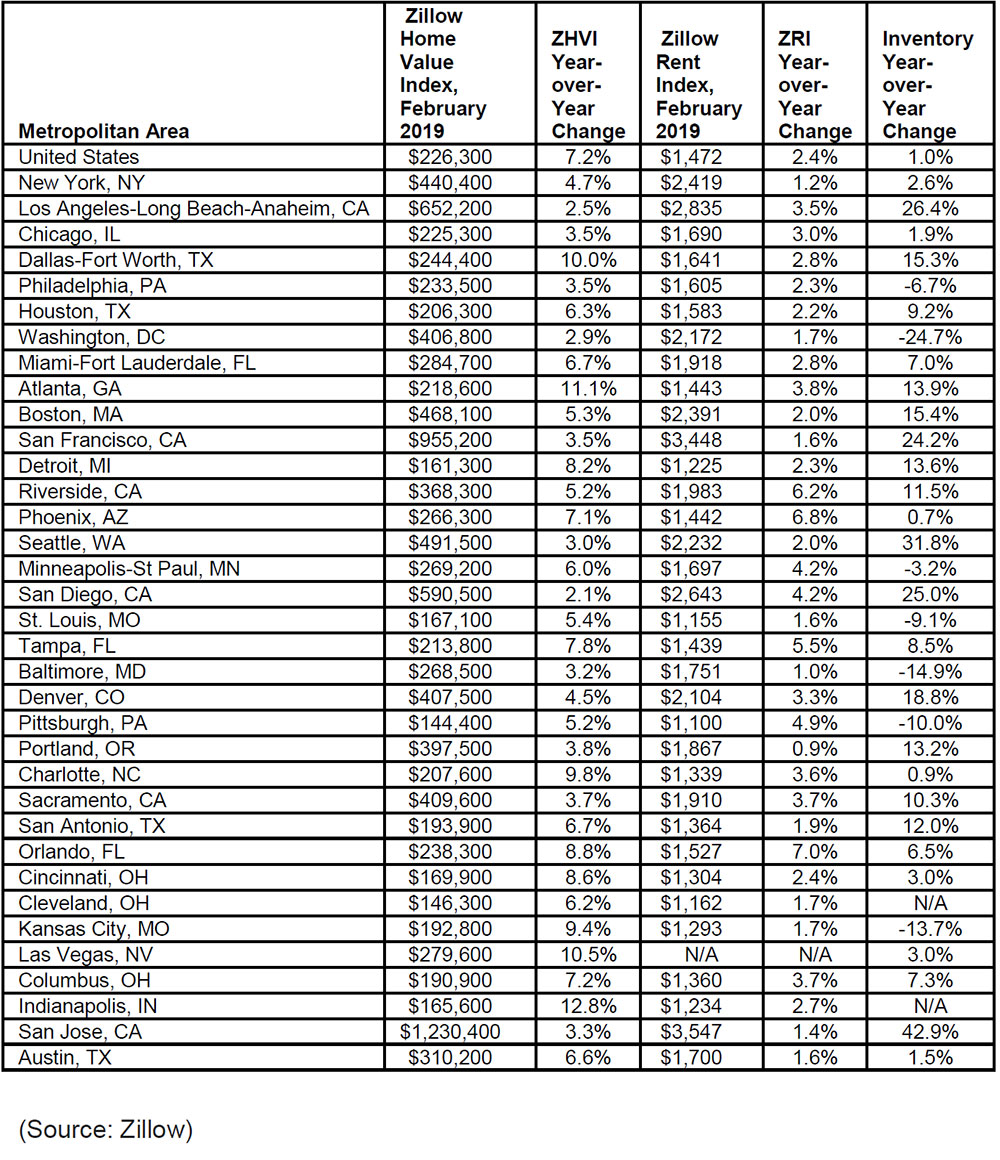