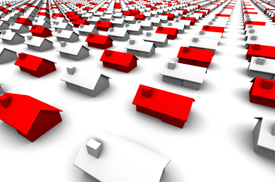 In my last article, we examined the shadow inventory to determine how many distressed properties (not on MLS) were almost certain to be forced onto the market in the not-to-distant future.

For a sensible follow up, let's take an in-depth look at so-called "strategic defaults" to see how many homeowners are likely to "walk away" from their mortgage debt although they might be financially able to continue paying it.

According to Wikipedia, a strategic default is "the decision by a borrower to stop making payments (i.e., default) on a debt despite having the financial ability to make the payments."  This has become the commonly accepted view.

In a recent, thorough study of strategic defaults, an effort was made to narrow its definition even more specifically.  The report examining 6.6 million first lien mortgages was published this past April by Morgan Stanley analysts.  They considered a default to be strategic only if a borrower went from being current on the debt to 90 days delinquent in consecutive months "without any curing in between or thereafter."

The authors went further and included two other prerequisites.  First, the borrower had to be "underwater" on the first lien mortgage.  Second, the homeowner had to have an outstanding non-mortgage debt balance of more than $10,000.  The purpose of this last requirement was explained to me in a phone conversation with the lead analyst.  He clarified that unless the borrower had at least $10,000 in non-mortgage debts which continued to be kept current; it was very likely that the mortgage default was induced by the inability to continue making the payments.

While this definition by the Morgan Stanley analysts is plausible, I consider it to be too narrow.  It excludes too many borrowers who choose to stop paying the mortgage even though they may miss payments on some of their other debt obligations.  I define a strategic defaulter to be any borrower who goes from never having missed a mortgage payment directly into a 90 day default.  We'll examine a graph a little later which clearly illustrates this definition.

Why Do Homeowners Walk Away from Their Mortgage?

In the midst of the housing bubble, it was inconceivable that a homeowner would voluntarily stop making payments on the mortgage and lapse into default while having the financial means to remain current on the loan.

Then something happened which changed everything.  Prices leveled off in 2006 before starting to decline.  With certain exceptions, they have been falling ever since around the country.  In recent memory, this was something totally new and it has radically altered how homeowners view their house.

In those metros where prices soared the most during the housing bubble and collapsed most severely, many homeowners who have strategically defaulted shared three essential assumptions:

1. The value of their home would not recover to their original purchase price for quite a few years.

2. They could rent a house similar to theirs for considerably less than what they were paying on the mortgage.

3. They could sock away tens of thousands of dollars by stopping mortgage payments before the lender finally got around to foreclosing.

Put yourself into the mind and the shoes of an underwater homeowner who held these three assumptions.  The temptation to default became very difficult to resist.  What would you have done?

Now you may ask: What has kept most underwater homeowners from defaulting?  This is not an easy question to answer.  I suggest that you take a look at a very thorough discussion of this issue in a paper written by Brent White, a professor of law at the University of Arizona and published in February 2010.  Its title is "Underwater and Not Walking Away: Shame, Fear and the Social Management of the Social Crisis."  He asserts that there are strong societal norms and pressures that lead to feelings of shame, fear and guilt which prevent many underwater homeowners from choosing to default.

He also cites the strong moral condemnation heaped on strategic defaulters by the press as well as by significant political figures.  Take the speech given in March 2008 by then Secretary of the Treasury Henry Paulson.  Paulson declared on national television: "Let me emphasize, any homeowner who can afford his mortgage payment but chooses to walk away from an underwater property is simply a speculator - and one who is not honoring his obligations."  Coming from the former Chairman of a Wall Street firm that earns billions every year by speculating, these words had a certain hollow ring to them.

Within the past six months, two important studies were published which have tried to get a handle on strategic defaults.  First came the April report by three Morgan Stanley analysts entitled "Understanding Strategic Defaults."  Remember their narrow definition of a strategic defaulter which I described earlier:

1. an underwater homeowner who goes straight from being current on the mortgage to a 90+ day delinquency "without any curing in between or thereafter"

2. has an outstanding non-mortgage debt balance of at least $10,000 which does not become delinquent

The study analyzed 6.5 million anonymous credit reports from TransUnion's enormous database while focusing on first lien mortgages taken out between 2004 and 2007.

One conclusion which the authors reach is that the percentage of defaults which they label strategic has risen steadily since early 2007.  By the end of 2009, 12% of all defaults were strategic.  Even more significant is that loans originating in 2007 have a significantly higher proportion of defaults which are strategic than those originated in 2004.  The following chart clearly shows this difference. 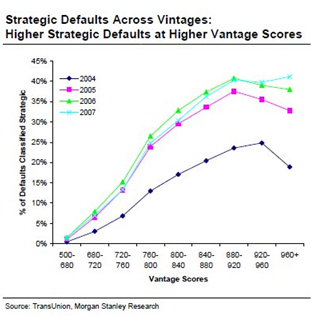 It is also important to note that with higher Vantage credit scores, the strategic default rate rises very sharply.  [Vantage scoring was developed jointly by the three credit reporting agencies and now competes with FICO scoring].

Another Morgan Stanley chart shows us that for loans originated in 2007, the strategic default percentage also climbs with higher credit scores. 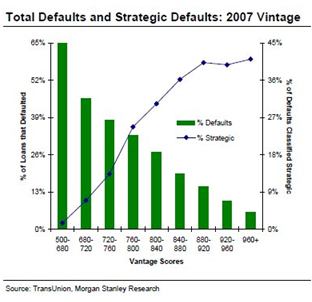 Notice that although the percentage of loans which default at each Vantage score level declines, the percentage of defaults which are strategic rises.  A fairly safe conclusion to draw from these two charts is that homeowners with high credit scores have less to lose by walking away from their mortgage.  The provider of these credit scores, VantageScore Solutions, has reported that the credit score of a homeowner who defaults and ends up in foreclosure falls by an average of 21%.  This is probably acceptable for a borrower who can pocket perhaps $40,000 to $60,000 or more by stopping the mortgage payment.

There is one more key chart from the study that is worth looking at.  This one looks at strategic default rates for different original loan balances. 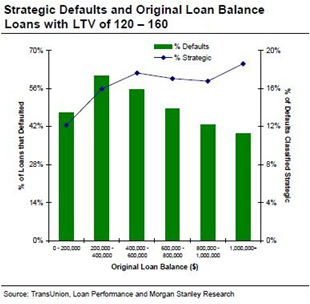 Note that the size of the original loan balance has little impact on the strategic default rate.

The Key Factor Behind Strategic Defaults

Then what is the decisive factor that causes a strategic default?  To answer this, we need to turn to the other recent study.

This past May, a very significant study on strategic defaults was published by the Federal Reserve Board.  Entitled "The Depth of Negative Equity and Mortgage Default Decisions," the study was extremely focused in scope.  It examined 133,000 non-prime first lien purchase mortgages originated in 2006 in the four bubble states where prices collapsed the most --  California, Florida, Nevada and Arizona.  All of the loans had 100% financing with no down payment.  These loans came to be known as 80/20s - an 80% first lien and a 20% piggy back second lien.  It's hard to remember that those deals once flourished.

The first conclusion to note is that an astounding 80% of all these homeowners had defaulted by September 2009.  Half the defaults occurred in less than 18 months from origination date.  During that time, prices had dropped by roughly 20%.  By September 2009 when the study's observation period ended, median prices had fallen another 20%.

The study really zeroes in on the impact which negative equity has on the decision to walk away from the mortgage.  Take a look at this first chart which shows strategic default percentages at different degrees of being underwater. 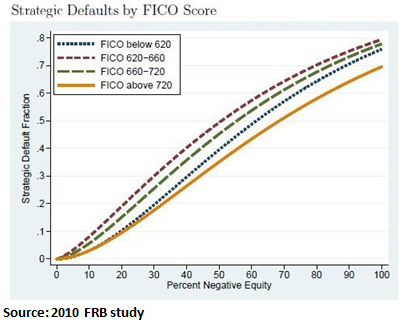 Now take a look at this last chart.  It focuses on the impact which negative equity has on strategic defaults based upon whether or not the homeowner missed any mortgage payments prior to defaulting. 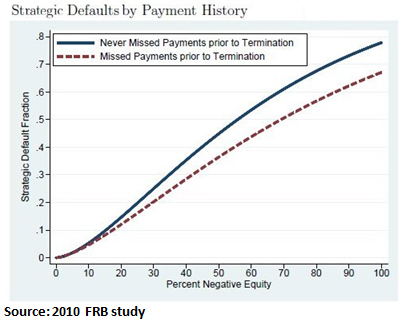 This chart shows what I consider to be the best measure of strategic defaulters.  It separates defaulting homeowners by whether or not they missed any mortgage payments prior to defaulting.  As I see it, a homeowner who suddenly goes from never missing a mortgage payment to defaulting has made a conscious decision to default.  The chart reveals that when the mortgage exceeds the home value by 60%, roughly 55% of the defaults are considered to be strategic.  For those strategic defaulters who are this far underwater, the benefits of stopping the mortgage payment outweigh the drawbacks (or "costs" as the authors portray it) enough to overcome whatever reservations they might have about walking away.

Where Do We Go From Here?

The implications of this FRB report are scary.  Keep in mind that 80% of the 133,000 no down payment loans examined had gone into default within three years.  Clearly, homeowners with no skin in the game have little incentive to continue paying the loan when the property goes further and further underwater.

While many of these 80/20 zero down payment loans have already gone into default, there are still a large number of them originated in 2004-2005 which have not.  We know from LoanPerformance that roughly 33% of all the Alt A loans that were securitized in 2004-2006 were 80/20 no down payment deals.  Over 20% of all the subprime loans in these mortgage-backed security pools had no down payments.  These figures are confirmed by the Liar Loan study which I referred to in a previous article.  It found that 28% of the more than 700,000 loans examined in that report which had been originated between 2004 and 2007 were 80/20 no down payment deals.

The problem of strategic defaults goes far beyond those homeowners who put nothing down when they bought their home.  Although the Morgan Stanley study found that only 12% of all the defaults observed were homeowners walking away from the mortgage, I think their definition of a strategic defaulter is much too narrow.

The chart from that study which we looked at earlier shows strategic default rates when the loan exceeded the home value by 20-60%.  Total default rates were over 40% for mortgages of all sizes.  This tells me that a substantial proportion of all these defaults by underwater homeowners were walk-aways.

It is not only the four worst bubble states examined in the FRB study to which these two reports are applicable.  Remember, prices have declined by 30% or more in just about all of the 25 large metros that had the highest number of distressed properties which I examined in my previous article on the shadow inventory.

Another chart from the Morgan Stanley study showed that for all the 6.6 million loans analyzed, the percentage of them defaulting rose steadily from 45% for loans with a LTV of 100 to 63% for loans with a LTV of 155.  It seems clear from these two reports that as home values continue to decline and LTV ratios rise, the number of homeowners choosing to strategically default and walk away from their mortgage obligation will relentlessly grow.  That means real trouble for all major housing markets around the country.