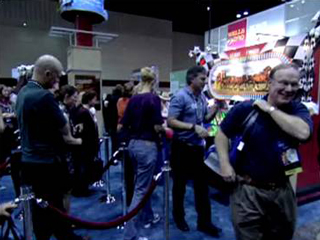 (ORLANDO, FL) - Just days after the historic U.S. presidential election, two words are etched in the minds of many Americans: hope and change. Those same two words best describe the psyche of today's real estate agents, many of whom are hopeful the housing market will finally change for the better in 2009.

At least that was the prevailing attitude this past weekend at the annual convention for the National Association of Realtors. One of the 20,000-plus attendees was Tom Maynor, senior production manager for Denver-based Re/Max International.

"I think the mood is like anywhere else. ... you're going to get varying levels of response," says Maynor, who oversees production of his real estate brokerage firm's satellite network programming. "What our co-founder Dave Lininger likes to say is we have an event going on like an earthquake. You can't do anything about the event. It's how you respond to the event that's going to make a difference for your business. We've got a lot of experienced Re/Max agents who know what the market's like and they're adjusting and moving accordingly."

For Phoenicia Development chief executive Tom Harb, that means moving forward with an Orlando-area luxury housing project scheduled to be the showcase community in the 2010 Street of Dreams. As an ever-hopeful Harb puts it, the worst is behind us.

"Let me give you a little bit of history," adds Harb, whose company also is a prominent commercial real estate developer. "The (housing) market has been going down since March 2006, and I think we saw the bottom of this market in August-September 2008. So now we see the market is coming up. And that's why we're investing in luxury products. The Street of Dreams picked up our project and we are very, very optimistic (about the future)."

In Texas, Realtor Yolanda Martinez-Sink is particularly optimistic about her Dallas-Fort Worth area because the market is starting to see a decrease in housing inventory and increase in corporate job relocations.

"A year or two ago, the consumers were very nervous and homes would sit on the market for quite some time," says Martinez-Sink, founding agent and owner of Plano-based Real Living Advantage Realty. "So a lot of consumers, a lot of sellers, were canceling their listings and just kind of sitting back and waiting. Now, I truly, truly feel it's the complete opposite. People see a glimpse of hope. They see change on the horizon and their attitude is a lot different."

Perhaps this shot of optimism is being fueled by recently released NAR data that shows the U.S. housing market continues to show signs of stabilization. For example, in a monthly report released Nov. 7, the NAR's Pending Home Sales Index dropped 4.6 percent from an upwardly revised August reading of 93.5, but the index was still 1.6 percent ahead of the previous September's reading.

"The month-to-month weakening in pending home sales is understandable, but because the index remains above year-ago levels it means we're still in a broad period of stabilization," said NAR chief economist Lawrence Yun, referring to a leading indicator for the housing sector. "Conditions remain mixed around the country, but markets that are showing annual sales gains include Long Island, N.Y.; Boston; Minneapolis; Denver and Washington, D.C., in addition to consistent solid gains in California and Florida."

Another bullish market - despite the weakening U.S. economy - is in the Dominican Republic. That's where sales representative Patricia Guerra de Calderon is selling a new residential resort-style community in the up-and-coming area of Las Terrenas, Samana.

"Maybe (the recession) will affect us but not right now because our prospects are looking for something secure at this moment," says Calderon, whose country attracts a strong international clientele, in addition to the U.S. markets. "People don't want to have their money in banks or stock market. ... They are looking for something secure. Our country is excellent, we have stunning beaches and our construction is very good. We have many international clients that come looking for these kind of second homes and investments."

Of course, another growing market is the auction industry, where a flood of foreclosed and distressed properties keep ending up. According to longtime Bartow, Fla.-based auctioneer Scott Oglesby, a member of the National Auctioneers Association exhibiting at this year's NAR Expo, real estate is the fastest-growing sector of the auction industry, representing approximately 15 percent of the $240 billion annual business.

Oglesby cautions, however, that the auction industry isn't a barometer for the real estate business. In other words, just because a lot of properties are being sold through auctions, that doesn't mean the real estate market is "necessarily hurting."

"We've been selling real estate at auctions for hundreds of years," adds Oglesby, broker auctioneer for Bartow, Fla.-based United Country Oglesby and Company Auctioneers. "In the last 5 to 7 years we've been selling a tremendous amount of real estate at auctions not necessarily in a distressed market. What we're able to do is get buyers off the fence, and get them to commit to a property that they may not have had the motivation or inclination to actually step up to before.

"The brokers and the agents that are coming to us, and the individual sellers as well as the institutions, are looking for help from auctioneers to motivate the buyers to participate in the process. There are quality properties available; the values are still good, however, nobody knows where to value it and to get (buyers) off the fence. That's what they're coming to us for to help determine a value."

The recent election of President-Elect Barack Obama, a strong proponent of implementing a more Main Street-driven housing stimulus package, should prove to be another catalyst for the industry, according to people like Steve Moreira of Orlando-based Magic Properties and Investments.

"As realtors we're real positive about where we think the market will go," says Moreira, past president of the Orlando Regional Realtors Association. "We just had an election, so things should start settling down. We've done a lot of things at this conference that we think are going to be helpful for us to improve our industry. Plus our numbers are a little better in Orlando than around the rest of the state of Florida as far as inventory goes.

"I think nationally after the election everyone wants to be positive that a decision has been made and the new administration is going to take some steps for things to get better in the housing market also."