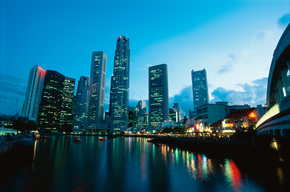 According to Jones Lang LaSalle's regional market experts, office rents in Asia Pacific are holding steady in Q2 while more companies are maintaining a 'wait and see' approach to location decisions.

Jones Lang LaSalle's Asia Pacific office leasing markets report for the second quarter of 2012 says those markets that were experiencing office rental declines in previous quarters are anticipating a slowdown in the rate of decline.

Elsewhere in the region it is once again a mixed picture; the Jones Lang LaSalle markets teams are predicting:


Jeremy Sheldon, Managing Director of Asia Pacific Jones Lang LaSalle tells World Property Channel, "We continue to see the majority of Multi National Corporation's across Asia Pacific adopt a 'wait and see' stance on expansion, given economic uncertainties, which is having a delay effect on their property decisions. This is translating into static rents in some markets, and smaller rental declines in others. We are finding those landlords who can afford to "sit" are doing so, thus holding fairly firm on asking rents. This is resulting in stability in rents for now. Of course each market has very different dynamics, and the one market which stands out again this quarter in terms of the rental growth is Jakarta. The demand for space from companies as a result of the very healthy economic outlook in Indonesia is creating activity in all sectors and locations in Jakarta. For the second half of the year, the economic frailties of the Eurozone and a hard versus soft landing in China will be the determining factor on overall office take-up in the region. However, as inter-regional trade continues to grow and domestic Asian companies perform, we remain positive for the full year."

Beijing: Grade A office rents expected to grow c. five percent in Q2. Companies are looking at more creative ways to fit more people in their current space and overall rental increases are being impacted by deals being agreed with rental caps in place.  If these rental caps were not being offered, the rental increase would most likely be higher. Nonetheless, the lack of Grade A office supply should support rents in the foreseeable future.

Delhi: Grade A office rents expected to grow 0 - 1 percent in Q2.  Companies are expected to remain interested in office space in the SBD (Secondary Business Districts), though the suburbs will continue to offer competitive rents, thus providing an alternative location to firms looking for new office space.

Ho Chi Minh City: Grade A office rents expected to decline c. two percent in Q2. We can see signs of accelerating rental declines in the second quarter as some new developments have started pre-leasing with competitive offers. The two newest Grade A buildings in the city continue to face downward pressures in rents due to high vacancy levels, although moderate leasing activity should help to limit rental declines. More mature Grade A buildings should continue to maintain healthy occupancy levels and more stable rents.

Hong Kong: Grade A office rents expected to decline 3-4 percent in Q2. Limited demand at the top end of the Grade A market is maintaining pressure on rents. There is limited new leasing activity from larger firms in Central, although we are still seeing some smaller new market entries focusing on buildings with smaller floor plates. There is limited relocation activity, mainly focused on lower cost buildings within the same district.

Jakarta: Grade A office rents expected to grow 7-9 percent in Q2. We are expecting a similar level of take-up of space compared with Q2 last year and pre-commitment levels continue to increase in upcoming projects.  As Grade A vacancy continues to fall to below three percent some firms are being forced to Grade B space.

Manila: Grade A office rents expected to grow c. two percent in Q2. Take-up is expected to improve as companies are starting to pre-commit to space in office developments again. New demand is coming from the space requirements of a few large MNCs that are choosing to consolidate their global back-office operations to the Philippines. Rental growth is being supported by sustained demand, especially from the offshoring and outsourcing sector.

Mumbai: Grade A office rents expected to grow 1-2 percent in Q2. We expect only marginal rental increase expected in 2Q12. Developers are likely to refrain from increasing rents to encourage occupiers to finalize transactions that have been on hold for some time (due to caution amongst corporates generally) and also given the high vacancy rates in suburban markets.

Seoul: Grade A office rents expected to remain stable in Q2. There is sustained demand from domestic firms, particularly in some recently completed CBD buildings, but lower levels of enquiries from Multi-National Corporations (MNCs); some relocations are being postponed/cancelled and a small number of MNCs are handing back some space.  We expect CBD rentals to reach the bottom of the cycle this year, but rental gains in the CBD are unlikely until next year due to further new supply additions and space coming back onto the market in some buildings as tenants move out.

Shanghai: Grade A office rents expected to grow 2-3 percent in Q2. Although many tenants still remain conservative in regard to expansion plans, leasing market sentiment is starting to improve as evidenced by higher levels of enquiries and tenant interest. In addition the tight supply situation in the core CBD area is also supporting moderate rental growth.

Singapore: Grade A office rents expected to decline c. three percent in Q2, less than in the first quarter of the year. Rentals are mostly taking place in new buildings, but there have been very few transactions in the current quarter to date. Landlords of buildings with high occupancy levels remain firm on their rents, which is why we are projecting only minor declines in Grade A rents this quarter. Headcounts remain stable but many companies are adopting a 'wait and see' approach towards leasing decisions which is equating to sluggish new demand, particularly amongst large financial services firms.

Sydney: Grade A office rents expected to remain stable in Q2. Sentiment is being impacted by on-going delays in the completion of larger leasing deals, coupled with less relocation demand. Owners are more willing to increase incentives in order to attract or retain tenants. Limited new supply in 2012 should support rental growth, though the impact is yet to be reflected in rents.

Tokyo: Grade A office rents expected to remain stable in Q2. Companies continue to prefer buildings with good earthquake protection, so this 'flight to quality and safety' is supporting demand for Grade A office buildings in prime locations, and consequently Grade A vacancy is falling slightly. This desire for Grade A space is also helping to buoy demand for new developments due for completion this year, though it is resulting higher vacancies in the wider office market.