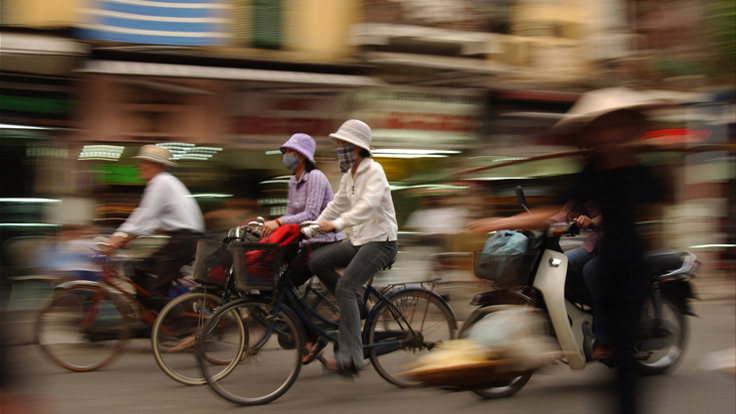 After a torrid two years that saw its real estate market freeze, Vietnam is beginning to attract interest from overseas investors once again. Though the market has yet to bottom, early adopters are betting the upturn is to come soon.

EXS Capital said on July 16 that it had led the formation of a US$37 million pool of around 50 high net worth individuals to invest in the real estate developer Son Kim Land. The money, which could rise to US$80 million depending on demand, will go fund the development pipeline of the company, the property subsidiary of the prominent retail-focused conglomerate Son Kim Group.

"The market is staring to thaw," Trinh Bao Quoc, the chief executive of Son Kim Land, told the World Property Channel. "If you have the right product in the right area, it is still selling."

EXS Capital, a small private equity advisory with offices in Hong Kong and Tokyo, is not alone. At the end of May, private-equity giant Warburg Pincus made its first foray into Vietnam, heading a consortium that is buying a US$200 million stake in the retail property business of Vingroup, the country's largest private real-estate company.

"It is the potential for distressed deals that is attracting EXS Capital."

In April, the Korean chaebol, or conglomerate, Lotte bought the luxury riverfront Legend Hotel Saigon. Lotte plans to open another hotel in Hanoi in 2014 and already has five supermarkets in Vietnam, a tally it expects to bring to 35 across the major cities of Ho Chi Minh City, Hanoi, Haiphong, Danang and Can Tho. The Japanese retailer Aeon has also announced plans to enter the market in 2014 with a large mall in western Ho Chi Minh City.

The activity is the latest twist in a market that has seen a series of ups and down in recent years. Interest in residential property was once so frenzied that fist fights broke out in waiting lines to sign up for new-build projects in Ho Chi Minh, the country's business hub. But that passion evaporated when the currency plunged and borrowing clammed up.

The performance record for Vietnamese property in recent years is one of the worst in the world. Prices for residential real estate in Ho Chi Minh City fell 10 percent last year, according to Knight Frank's prime international residential index, 70th out of the 80 major cities that the brokerage tracks.

On the office side, rents have fallen for four years. "Weak demand and ample available space may put downward pressure on rents," Jones Lang LaSalle said in its Asia Pacific Property Digest. The country's transparency is also among the worst in the world, according to the brokerage. But with the decline in rents slowing, JLL anticipates stabilization over the next 12 months.

At 4.9 percent for the first quarter, Vietnam's economic growth is moderate for emerging Asia, but has been steady - it hasn't fallen below 4 percent since the middle of 2009. Inflation and interest rates have fallen below 7 percent.

Interest rates have been on a roller coaster ride in Vietnam, causing severe stress on the financial system and the ability to borrow to buy property. While many purchasers pay in cash, as they do in neighboring China, their finances were stretched by inflation that soared as high as 23 percent in August 2012, almost matching the 28 percent rate it hit four years earlier, at the height of the financial crisis. Borrowing rates in 2011 spiked to 25 percent.

It is the potential for distressed deals that is attracting EXS Capital. The firm avoided Vietnam during the boom years of 2007 to 2009, when it considered real estate there "too bubbly."

"We consider ourselves to be very contrarian, value-driven investors," Eric Solberg, co-founder and chief executive of EXS Capital, told World Property Channel. When rates shot up in mid-2011, "we saw this opportunity where a lot of good real estate developers were getting badly hurt by these market conditions. We felt if we went and found the right partner and could bring them even a very little bit of money we could make a significant impact."

The company interviewed 27 different developers and performed due diligence on six before settling on Son Kim Land.

Outright distressed deals are rarely found in Vietnam, Quoc, the Son Kim Land CEO, noted, and that's where a local partner is important. Developers that have run into financial trouble still hope to save "face," their public reputation, and do distressed deals behind closed doors - without calling them that. "It's helping people getting out of a tough situation," he said.

Son Kim Land has six projects in the pipeline, including two mixed-use developments in District 2 of Ho Chi Minh City. Those are close to the city's first subway line, connecting downtown District 1 with a new airport that is under construction.

"That corridor in my view is really going to be the Orchard Road of Ho Chi Minh," Solberg said, referring to Singapore's busiest shopping street. "I started going to Vietnam professionally in 1992. It is a market that we have known and liked fundamentally for a very, very long time."

Vietnamese citizens have few options for investing their money, with the country's stock market small and very erratic. Gold has been a popular fallback, but with the metal down 24 percent year to date, investors are returning to bricks and mortar.

As in other property markets around the world, investors that were burned during the global financial crisis are increasingly demanding, requiring greater transparency and more input over how their money is invested. EXS says it has worked hard to raise money in a tough market, so it can be deployed quickly when Son Kim identifies opportunities, rather than raising money when a bull market is already under way. Fund raising may be easier then, but Solberg believes managers end up investing at the top of a market.

"Regional or domestic investors have had a very hard time, especially in the last couple of years, in terms of raising blind pool funds - blind pool has become a four-letter word," he said. "With these investors, we have taken them by the hand and taken them done to Vietnam and introduced them to the management team. We have walked the sites with them. They have been able to touch and smell the deal very directly."

Some market watchers say deal flow won't hit full levels until funds operate more openly. "Investors across Asia are favoring a more direct form of investment, where visibility of deals is key," Marc Townsend, the managing director of the Vietnam office of the property brokerage CBRE, noted in a July 11 presentation at the Hilton Hanoi Opera.

According to research compiled by Professor Graeme Newell for the property-industry group APREA, Vietnam has the smallest pool of investable real estate in Asia, at just $21 billion, less than half the $48 billion in the second-from-last Philippines. Newell estimates that sum will treble to $65 billion by 2021 and hit $171 billion in 2031, although it will remain Asia's tiniest market (Newell did not assess frontier nations such as Cambodia, Laos, Bangladesh and Myanmar).

Despite that small size, the bulls feel this is the start of their run. "We're positive, we're not even cautiously optimistic," Quoc said.