Croatia will become the 28th country to enter the European Union on July 1, a move which could spark interest in the country's property market. Bulgaria, Czech Republic, Hungary and Poland all saw dramatic increases in property transactions after joining the EU.

But experts doubt the entrance into the EU will provide a similar spark to the former Yugoslavia republic. 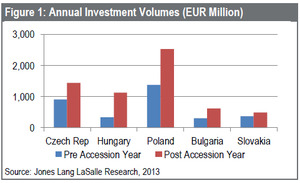 "Whilst we are optimistic that it will have a positive influence on the real estate market, the difficult economic conditions will somewhat limit the effects that were seen by previous entrants," Jones Lang LaSalle concludes in a recent report."

But the consultancy does forecast "short to medium term" opportunities in the industrial and logistics market, as well as an increase in property investments.

"We would anticipate that upon entry Croatia will now be considered by some investment funds who previously would not contemplate such an investment," JLL reports.

When Bulgaria entered the EU in 2007, the volume of transactions nearly doubled in 2008 compared to pre-EU days. When the Czech Republic, Hungary and Poland entered in 2009, property investments increased 57 percent, 236 percent and 84 percent, respectively.

But those were different times. With Europe struggling through a prolonged recession, EU membership is unlikely to boost to Croatia's market.

"Property investors remain relatively cautious and coupled with a lack of available finance, it is difficult to assess what impact the accession will have," JLL reports. "We consider that while it may not be the golden egg that some are hoping for, it must surely offer some degree of hope to the property industry."

The increased transparency and financial and legal stability offered by EU membership boosted office demand in other countries that entered the EU, but Croatia is already dealing with an oversupply of space, according to JLL. In similar fashion, the firm doesn't expect any rush of demand for new retail space, given the economic climate.

But in the industrial and logistics market, Croatia is "uniquely positioned" to benefit from increased EU trade, thanks to its strategic location.

"Elimination of trade obstacles and the opening of national markets make it possible for a larger number of companies to compete," JLL reports.

Croatia is approaching entry to the EU with marked ambivalence, in the wake of the economic turmoil that gripped the continent. Although 85 percent of the population originally supported EU membership, now only 60 percent are in favor of entry, and only 49 percent believe the country will benefit from membership, the Associated Press reports.

Unemployment stands at about 20 percent and the country's credit rating has dropped in recent years. Corruption is also an ongoing problem. Former Prime Minister Ivo Sanader is in jail, serving time for taking bribes from foreign companies.

"Croatia will feel the benefits of EU entry in three to five years," Croatia National Bank governor Boris Vujcic told the Associated Press. "In the short term, nothing major will change."