Based on the latest European Shopping Center Development report by Cushman & Wakefield, Central and Eastern Europe (CEE) continued to dominate shopping center development activity last year and accounted for nearly 70% (2.4 million sq m) of all space added to the market in H2 2013. 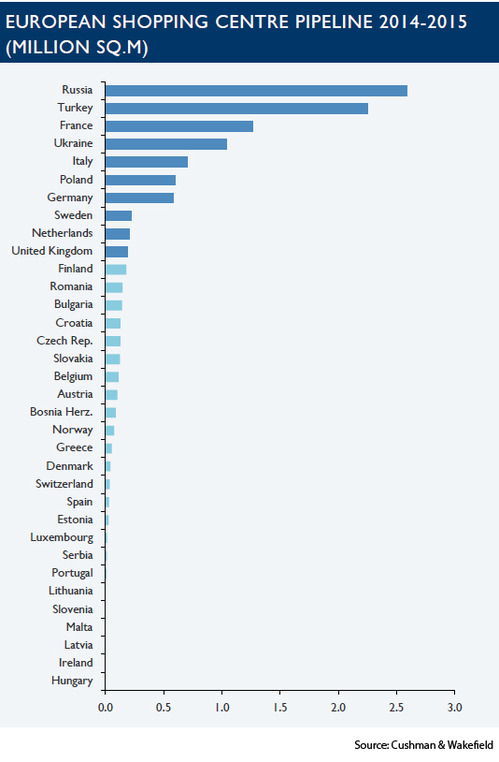 Overall, development across Europe picked up considerably in the second half of 2013 with 3.6 million sq m of new shopping center gross leasable area (GLA) delivered onto the market.  This is twice the amount of space completed in H1 2013, albeit the total figure was lower than previous forecasts, with the opening date of a number of projects delayed into 2014.

James Chapman, head of Cushman & Wakefield's Central European capital markets team tells WPC News, "Appetite for shopping center investment is returning to pre-crisis levels and recent development activity has created new opportunities.  Many of the larger cities across Central Europe are now reaching saturation point with the exception of Warsaw where potential exists for new large-scale retail.  In most other top-tier cities the focus is on repositioning existing centers to drive performance, whilst the completion of numerous new centers in smaller cities - with a 100,000+ population - has helped to intensify competition and attract investor attention."

Meanwhile, Turkey is anticipated to benefit from the second largest pipeline in Europe, with over 2.2 million sq m expected to be completed by the end of 2015. France leads the way in terms of the pipeline among Western European countries and is third overall, with a total of almost 1.3 million sq m of retail space to be delivered in 2014 and 2015, comprised of several extensions to existing schemes. 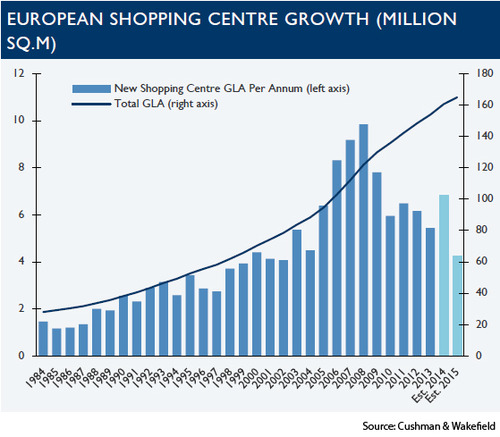 Martin Mahmuti, senior investment analyst at Cushman & Wakefield says, "CEE is expected to remain a development hotspot with two-thirds of all projected European space to be completed in 2014 and 2015 - 6.8 million sq m and 4.2 million sq m respectively - to be delivered in region.  However, the development pipeline for 2015 may be affected by geopolitical concerns in Eastern Europe which could lead to some projects being postponed into next year."

Looking forward to 2014, there are 203 new shopping centers due for completion across Europe; and 127 of these will be delivered in Central and Eastern Europe.  Of the 86 extensions to be opened, 65 will be located in Western Europe.  There will be 103 schemes and 32 extensions opening in 2015.  The Ukraine, Turkey and Russia will continue to fuel development across the continent, all three recording double-digit rises in total floorspace.