Germany is the most popular retail market in the world, with 40 percent of global retailers planning to open a store in the country in 2014.

Global retailers are attracted to Germany because it offers the opportunity to target 20 large cities in one market, according to the latest report from CBRE. When taking into account only European retailers, the report shows more than 70 percent of retailers plan to open a store in Germany in 2014. The country is the second-most important target for American retailers. 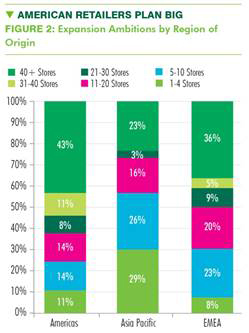 The second most popular market is France, attracting 26 percent of global retailers, followed by the U.K. (25 percent), Austria (22 percent) and China (22 percent).

According to the data, Switzerland, Belgium, Spain -- tied with Italy, Czech Republic and Sweden round out the top 10 global retail markets.

More than one-third of retailers are planning to expand their store portfolio by 40 locations or more in the next 12 months, underscoring a renewed confidence in the global retail market. Of these retailers, the most popular sectors are mid-range fashion and value fashion, accounting for one-third of the total each.

"While the pace of international growth has slowed in recent years, retailers are making clear their intention to materially invest in their store networks throughout 2014," Peter Gold, Head of Cross-Border Retail, CBRE, said in the report. "Their preference for a wide range of markets highlights the continued importance of cross-border growth." 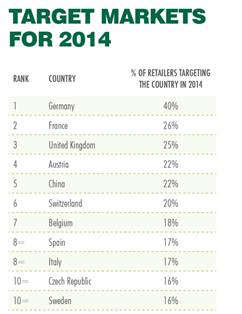 American retailers have the substantial large-scale expansion plans with 47 percent of them planning to open more than 40 stores in 2014. The U.S. is the largest retail market in the region, attracting 43 percent of retailers based in the Americas. However, as domestic markets mature and competition increases, many North America retailers are looking to expand globally, CBRE reports.

"With consumer confidence returning across many markets in Europe, North American retailers feel that this is the right time to capitalize on a largely untapped growth potential," David Close, director, Cross-Border Retail EMEA, said in the report. "US retailers are progressively developing their store networks and global offering - this trend will continue to grow and diversify in 2014 and beyond."