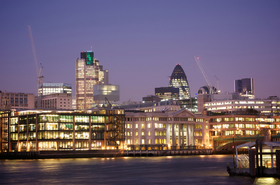 As world leaders gather at the World Economic Forum annual meeting in Davos, Switzerland to address global economic challenges, a new report by Jones Lang LaSalle reveals that more than half of all global real estate investment resides in 30 cities.

A quarter of the total investment is in five top-tier cities: London, Tokyo, New York, Hong Kong and Paris. This is set to change by the turn of the decade, however, when newer destinations such as Beijing, Shanghai, Moscow and Sao Paulo will become serious contenders for real estate dollars.

The "A New World of Cities" report finds that: 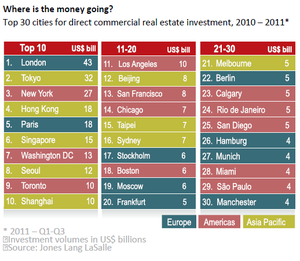 "We are already seeing a shift in where real estate investors are sending their capital," said Peter Roberts, CEO, Americas, Jones Lang LaSalle.  "The top 30 cities for real estate investment will become the top 50 as investors diversify their portfolios and corporate occupiers expand their geographic footprints to include emerging cities.  Advances in digital communications contribute to this expansion because companies will no longer have to physically cluster in some of the world's largest cities."

"In the BRIC countries, Grade A office stock is projected to grow by 10 percent per year over the next decade," said Roberts.  "Of these, China has the greatest opportunities with the world's 10 fastest growing new cities in terms of GDP - Chongqing, Tianjin and Chengdu topping the list."

Cities in China are being transformed by an unprecedented programme of development and modernization.  Jones Lang LaSalle has defined 50 secondary and tertiary cities in China that will account for 12 percent of global economic growth in the next decade. "Back in 2004, Tokyo and Hong Kong were the only Asian cities in the top 10 cities for real estate investment," said Roberts.  "Last year, however, we saw Tokyo, Hong Kong, Singapore, Shanghai and Seoul make the list."

The U.S. - a strong counter-balance

While much global attention has been paid to the growth of Asian cities, U.S. cities provide a strong counter-balance.  Nearly half of the world's office stock is located in the U.S., and more than one third of all commercial real estate investment takes place in U.S. cities. Eleven of those cities are expected to feature among the world's top 30 largest cities by GDP by 2020. Six of the top 30 fastest growing  cities in terms of absolute GDP will be in the U.S., including New York, Los Angeles, Chicago, Washington DC, Dallas and Houston.

"Over the next decade, 16 of the top 20 fastest growing mature cities will be in North America," said Roberts.  "Austin, TX and Raleigh-Durham, NC will be at the top of the list driven by technology, high-value activities and commitment to innovation."

Despite European economic turmoil, London has remained the top real estate investment pick with more than $43 billion invested in 2010 and the first three quarters of 2011, a third higher than the world's second most popular destination, Tokyo.

"Aside from London, Europe's other mega cities include Paris, Moscow and Istanbul.  They are truly global and offer diverse industries and sectors," said Christian Ulbrich, CEO EMEA.  "Other cities such as Munich and Stockholm offer strong real estate conditions and commitment to innovation, which will serve them well in a low-growth environment."

"While investors are still choosing to invest in strong, stable and transparent cities, new destinations offer a new world of potential," said Ulbrich.  "As the world changes so rapidly, the real estate investment map will follow suit.  Corporations will continue to assess their business locations, search for more value and deepen their geographic reach. Investors will diversify their portfolios and begin to search for new cities for their investments in the Asia Pacific and second or third tier cities in the West." 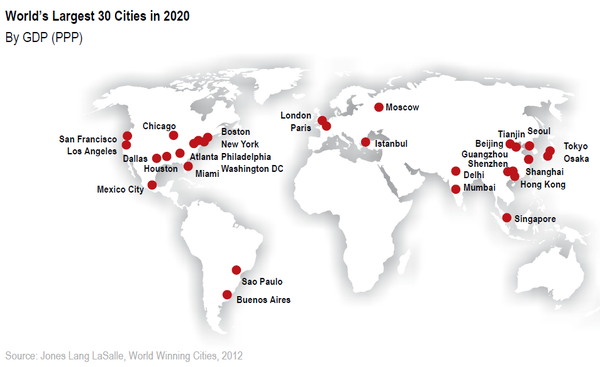 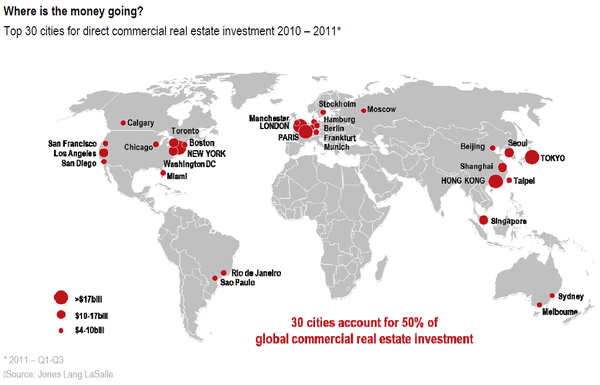