The property mogul's organization completed the purchase of the oceanfront Doonbeg Golf Club, which is the 16th golf club in the Trump portfolio, according to a company announcement.

The purchase price for the golf club was not announced. It will be renamed Trump International Golf Links, Ireland.

The golf club covers more than 400 acres and includes an 18-hole golf course. The resort includes 218 hotel suites, a spa and several restaurants, which will be managed by the Trump Hotel Collection. 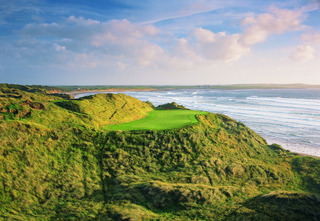 According to the BBC, Mr. Trump made the purchase in Ireland after a Scottish judge rejected his legal claim against a wind energy project off the Aberdeenshire coast. He states the project would spoil the view from his luxury golf course there.

"We will appeal this decision, and in the meantime we will be focusing all of our investment and energy towards our new acquisition on the Atlantic Ocean in Ireland," Mr. Trump said from New York.