According to hotel data compiled by STR Global, despite economic slowdowns in many regions of the world, hotel markets globally still posted mostly positive performance results for the month of August 2012.

Here is a breakdown of hotel markets by region from STR Global.

Hotels in the Asia/Pacific region experienced mixed results in the three key performance metrics for August 2012 when reported in U.S. dollars.

In year-over-year measurements, the Asia/Pacific region's occupancy ended the month virtually flat with a 0.1-percent decrease to 68.1 percent, its average daily rate rose 0.7-percent to US$139.49 and its revenue per available room was up 0.7 percent to US$95.01.

"Average room rate growth across the Asia/Pacific region slowed down in recent months with a 2-percent increase for the first eight months this year (YTD) after stronger growth performances last year", said Elizabeth Randall Winkle, managing director at STR Global. "Average rates for YTD are within US$ 4 just below their YTD 2008 performance, reflecting the strong market conditions across most of Asia/Pacific".

Highlights among the region's key markets for August 2012 include (year-over-year comparisons, all currency in U.S. dollars): 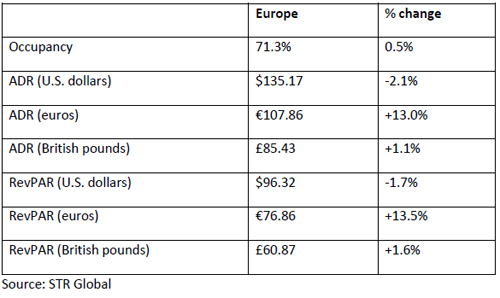 "European hotels reported a bounce in average room rates this August as the Olympics took full effect in London and the U.K., and German cities hosted major trade fairs", said Elizabeth Randall Winkle, managing director of STR Global. "Because the majority of the games took place during August, the event boosted average room rates in London, with the city reporting a 43.7 percent ADR increase in local currency. Further, average room rates in August 2011 were depressed with a 1-percent decline, leading to the bounce back. Occupancy managed to increase 0.5 percent compared to last year, halting a period of three months with declines.  However, it remains a factor to watch in the coming months, especially in conjunction with the economic developments in Europe".

Highlights from key market performers for August 2012 include (year-over-year comparisons, all currency in euros):

The Americas region recorded positive results in the three key performance metrics when reported in U.S. dollars for August 2012.

Performances of key countries in August 2012 (all monetary units in local currency):