The European press is buzzing with reports that the emir of Qatar has purchased six Greek islands for about €8.5 million ($11.1 million).

Sheikh Hamad bin Khalifa al-Thani, who reportedly likes to yacht in the Greek isles, will use the islands in the Ioanian Sea for holiday getaways and "to build a series of palaces for his three wives and 24 children," the Daily Mail reports. 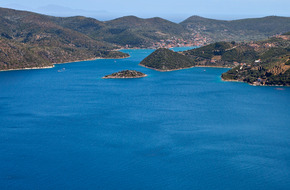 Ithaca island, near the Echinades chain

As often the case in these deals, clearly-sourced details are difficult to find. But there seems to be enough people talking on the record to suggest this is not simply one of those phantom celebrity deals that go viral, but were never based in fact.

The Financial Times first reported that the Sheikh had only purchased the uninhabited island of Oxia for €4.9 million, noting the deal "signals a renewal of interest in Greece by the gas-rich Gulf state."

But a few days later, the sale had ballooned into the six islands of the Echinades chain, including Oxia, described by the Guardian as the "biggest private investment in Greece."

Dennis Grivas, whose family has reportedly owned the islands for generations, told the Guardian,

"The islands have been in my family for over 150 years but we are not rich enough to be able to keep such valuable properties any longer... We are very, very happy to see them go. They have been on the market for nearly 40 years."

Greece is eager for Qatar investments, as it tries to rebuild its wallowing economy. Entities attached to the Gulf state's government have been linked to a variety of deals, including a plan to redevelop Athens' abandoned airport land. But the deals never materialized, in part due to Greece's famous bureaucracy, experts say.

Sheikh al-Tani reportedly started the process of acquiring the islands more than a year ago.

"Greece is that kind of place," Ioannis Kassianos, Ithaca's Greek-American mayor, told the Guardian. "Even when you buy an island, even if you are the emir of Qatar, it takes a year and a half for all the paperwork to go through."

The Sheikh may encounter more difficulties as he attempts to build his new island palaces, Mr. Kassianos told the paper.

"There is a stupid law because in Greece we do everything upside down," Kassianos said. "That law says that whatever the size of your land, your home can be no bigger than 250 square meters. The emir has reacted to this saying his WC is 250 square meters and his kitchen alone has to be 1,000 sq m, because otherwise how is he going to feed all his guests?"

The Echinades deal might be the first of several high-profile property transactions, as Greece looks to raise money. In addition to several islands, beachfront property in formerly untouchable locales such as Corfu and Rhodes has hit the market in the last two years, local officials say.