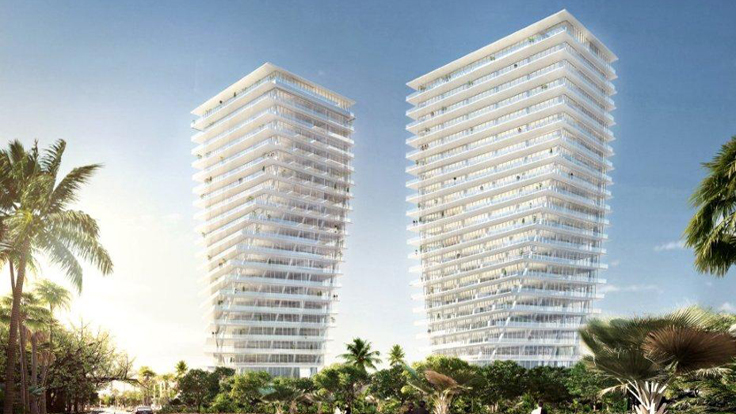 
The line stretched around the corner from the Colony Theater on Tuesday night, another sold out show in Miami Beach. Some people without tickets waited for an hour hoping a seat might open up.

"This is the line for the Madonna concert, right?" a 20-something man in black pants and white shirt said as he searched for the end of the queue. 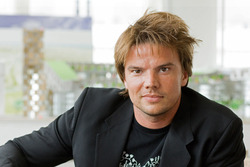 The headliner this night was Bjarke Ingels, the Danish architect who has achieved international stardom in recent years promoting "hedonistic sustainability" and "Yes is More," his comic book-style "manifesto of popular culture."

Ingels has "the swagger of a night-club d.j., but he is acquiring the reach of a major international corporate practice," the New Yorker wrote in a recent profile. From humble beginnings in Copenhagen, the Bjarke Ingels Group (BIG) is attracting the type of international commissions reserved for Frank Gehry, Foster + Partners and other elite architects, including tall building projects in New York and Vancouver. In December the firm was chosen to design the master plan for an updating of the Smithsonian. 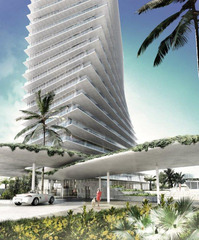 BIG is busy in Miami. The firm is a finalist to design a broad redevelopment of the Miami Beach Convention Center, competing with his old boss, Rem Koolhaas. BIG also designed The Grove at Grand Bay--twin, 20-story twisting glass residential towers in development in Coconut Grove.

On stage at the Colony, Ingels didn't discuss the much-debated convention center project in detail, but he talked about the role of the architect in "making sure cities fit how we live our lives."

"We don't have any political say, we don't have financial power, the only thing we have is the power of ideas," Ingels told the crowd. As BIG grows, the firm is "trying to adapt to different cities with different characteristics," he said.

For the Coconut Grove project, BIG didn't try to reinvent the essence of a Miami tower, he said. The brise soleil style balcony shading with floor-to-ceiling windows typical of most Miami condo towers are in his project, but he added a very real twist, orienting the towers to maximize the views and space. The result is a simple example of Miami architecture "with a feminine touch," Ingels said. 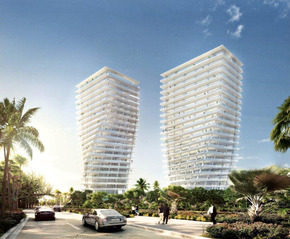 Miami architecture has been criticized recently, as too commercial and lacking the flair of other international cities. But Ingels praised the way Miami buildings address a sense of place. What works in New York doesn't work in Miami. "Glass towers in Miami without the balconies and overhangs would be one of the worst things you can do," he said.

Miami Beach is full of examples of "intimate scale and walkable neighborhoods," and he praised the functional aspects of the art deco movement.

"It's a very practical response to the elements," he said, pointing to the colors, canopies and shading that are key elements of any Miami design.

Despite his well-earned reputation as a non-conformist, "practical" is a word that often pops up with Ingels' designs. As he spoke to the beguiled Miami audience, reviewing his projects around the world, it became increasingly clear that Ingels is not as radical as the hype suggests. 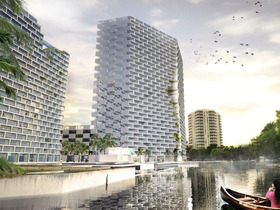 While his competitors create icons with wild shapes and complex facades; BIG's projects tend to be efficient and relatively easy to build. The outrageousness is often an illusion, the uniqueness stemming from a zig or a zag, the stacking of the apartments, the clever placement of a parking structure.

The most distinctive feature of his riverfront Ft. Lauderdale project is the appearance of a jagged cut down the middle. On closer inspection the gap is a simple stagger of the small apartments, which allows light and air into a high density wall of housing units.

"We are known for playful," he said at the Colony. "But we actually only do it when it really makes sense." 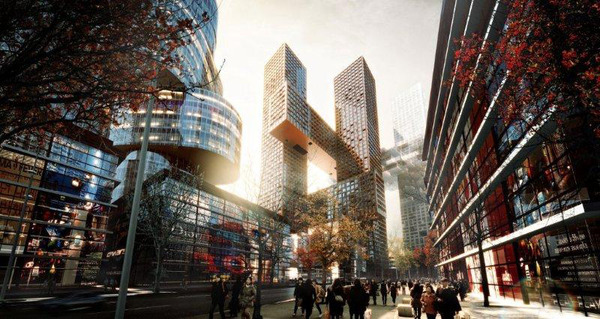