A New Model for Condo-Hotels


Condo-hotels have always had a spotty record in the U.S. The crash in real estate values beginning in 2008 severely affected the concept and prices fell from 50 to 60 percent and sales dwindled to almost zero.

Most of these condo-hotels were unsustainable from a financial viewpoint, either for individual consumers or investment companies. Most units operated at a negative cash flow as projections of occupancy and ADR's fell well below expectations.

Nearly all the condo-hotels on the market went through bankruptcy, and when the creditors put the properties on the wholesale, distressed property market they became bargains that were snapped up by savvy investors.

But the market is changing and there are new opportunities. The key is to find the right new business model that will make these properties successful.

Every resort and urban hospitality market has extensive data on hotel occupancy rates and ADRs that can be used for comparative analysis to determine the rental value of the property. The real estate data is usually very good for residential properties including villas and apartments/condominiums. But condo-hotels are much harder to assess as it is a combination of real estate and hospitality. What is missing is the pricing and velocity of the sales of the condo-hotel units to individual investors

In some cases the condo-hotel can be further segmented into a "shared ownership" program by subdividing a portion of the units into fractionals, private residence clubs (PRC) and even to timesharing unit weeks. This new model provides pricing and revenue flexibility more suitable to the current market.

The only group to transition from real estate to hospitality was the Trump Organization, which was originally a residential developer and later evolved into a resort developer. Now Trump is getting into the shared ownership timeshare industry with a mixed use golf project near Aberdeen in Scotland. (I made a timeshare presentation to Donald Trump 20 years ago. He told me that no developer made any decent profits in timesharing and ushered me out of his office!) Trump's new-found flexibility and willingness to try new business models has allowed him to survive and prosper in difficult times.

Thus, a developer who is contemplating a condo-hotel project has to determine the key element for success. Is it the real estate sales? Or the hospitality rental revenues? 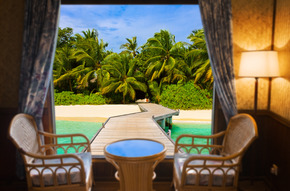 As prices come back from the bottom of the recession, the ratios are becoming unfavorable again. Land and construction costs are increasing, and the retail prices developers can charge are constrained by the upper limits of the occupancy and ADR ratios, the income split and the retail pricing. Very few consumers are prepared to subsidize a loss on their condo-hotel unit.

However, if the developer allocates 50 percent of the condo units to a shared ownership program, then substantial revenues and profits can be achieved. Currently in the Orlando market, the cost of the condo unit to developer is $160,000 and the retail price remains at $245,000, providing a gross margin of $85,000 to the developer. However, the timeshare component sells a unit week for $20,000 on average for 52 weeks for gross revenues of $1.04 million. Timeshare sales and marketing costs absorb 70 percent, creating net revenue of $312,000, less the $160,000 initial cost, leaving a gross margin of $161,000 for the timeshare units.

The blend of whole ownership vs. shared ownership units can be flexible to allow for changes in the market and the constant drive to maximize profits and cash flow for the developer, and provide a great product for the retail consumer.

Developers of condo-hotels have to adapt and be flexible in order to sell the units to the consumer and the new models being utilized in Florida are an indication that these projects can still be successful.

Michael Butler is the chairman and owner of Midlan International, a Florida-based consultancy that works with all aspects of the resort real estate industry.