According to Jones Lang LaSalle's new Global Office Index, prime office rents across 81 global markets increased by a further 1.1 percent during third quarter 2011 despite corporations delaying real estate decisions and facing renewed pressure to drive down costs in the face of economic volatility in Europe and the United States.

Asia Pacific office markets experienced the highest rental growth of 2.5 percent quarter-on-quarter. The Americas followed with an increase of 1.1 percent in Q3.  However, economic concerns in Europe have weighed down on markets and growth has come to a virtual halt in that region, from 2.1 percent in Q2 to 0 percent in Q3.

The firm's new Index shows this was the seventh consecutive quarter that prime rents have risen globally, reflecting an 8.2 percent uplift since the bottom of the market in fourth quarter 2009 and a 5.5 percent increase year-on-year.

Office rents rose further in most markets in Asia Pacific in quarter three, although at a slower rate than previous quarters. Of the 27 featured office markets, 18 saw advances in net effective rents; for the remainder, rents either stabilized or recorded small residual declines.  Aggregate rental growth was largely similar to the previous quarter, with an average quarter-on-quarter increase across the region of 2.5percent, as stronger growth in some Australian cities helped offset weaker behavior in Asia.  In Q2, the quarterly rental uplift averaged 2.4 percent.

Seven out of ten cities in the Global Office Index for quarter three were in Asia Pacific; two were in South America and one the United States.

Dr Jane Murray, Head of Research, Asia Pacific at Jones Lang LaSalle tells the World Property Channel, "The picture across Asia Pacific is diverse, reflecting varying conditions within markets in terms of occupier demand, available stock, landlord expectations and local economic drivers. We expect rents to increase in most markets over the short term, although Hong Kong and Singapore may witness some softening given their greater exposure to global economic conditions, while a few other laggards are also likely to see either no growth or some residual rental declines.  Rental growth of up to 25 percent is predicted across the region for 2012, with the strongest uplifts likely to be seen in markets such as Beijing and Jakarta."


Looking ahead to 2012, Jeremy Kelly, Director in Jones Lang LaSalle's Global Research team and author of the firm's Global Market Perspective which has just been released, commented: "We continue to expect positive rental growth in major prime office markets during 2012.  Most major markets are expected to see at least single-digit growth, with some markets such as Beijing, Tokyo, San Francisco and Toronto having the potential to outperform in 2012."

He added, "Despite signs of a deceleration in office leasing activity across the major international business hubs, the average global office vacancy rate of 13.8 percent is now the lowest in two years. The prime leasing markets in advanced economies are fairly tight and the supply pipeline remains very low. In this context, we believe that markets are well placed to resume their growth pattern once a degree of confidence resumes." 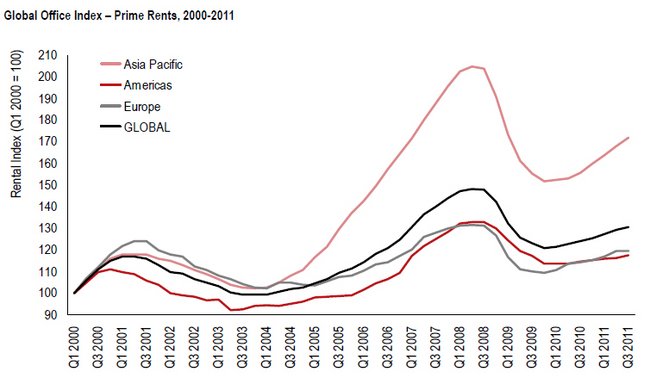 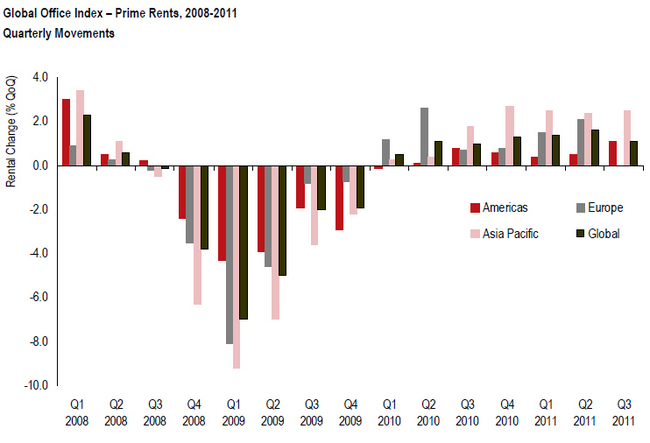