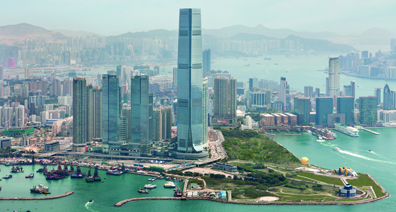 Based on a new report by global real estate firm Jones Lang LaSalle, ongoing corporate hiring and expanding accommodation requirements underpinned the Asia Pacific office leasing market in 2Q11. Aggregate net take-up across major Tier I markets was at a similar level to the previous quarter, but improved 28% year-on-year and remains close to record levels.

Vacancies trended down in many cities in 2Q11, and office rentals rose further in most markets outside of North Asia, albeit at a slower rate. Of the 27 featured office markets, 15 saw an increase in net effective rents during the quarter, while for the remainder rents stabilized or recorded small residual declines. Aggregate rental growth was largely similar to the previous quarter, with an average quarter-on-quarter increase across the region of 2.4%. In 1Q11, quarterly rental growth averaged 2.5%.

Rents in Beijing and Jakarta saw the largest q-o-q increases (+15.2% q-o-q and +14.6% q-o-q) in 2Q11, as vacancy levels fell rapidly in both markets. Among the major financial centers, growth in net effective rentals in Hong Kong and Singapore moderated to 6.6% q-o-q and 1.7% q-o-q, respectively, largely due to slower expansion of financial institutions and as some returning space emerged. Rents in Shanghai grew by 4.6%, as MNCs and domestic corporates drove strong spatial demand. In the twelve months to end-2Q11, Hong Kong and Jakarta delivered the strongest rental performance, with growth of around 30%.

Net effective rentals in Tokyo fell further by 0.4% as gross rents continued to decline while rent-free periods remained unchanged after the recent crisis. In a few other markets where tenant demand remains weak, rents have either stabilized (e.g. Taipei) or are seeing further declines (e.g. Seoul, Kuala Lumpur, Bangkok). Average rents in Australia and New Zealand generally saw moderate movements, both positive and negative, during the quarter. Perth recorded the largest quarterly increase of 5.0%.

Although investment activity moderated in 2Q11, most major markets outside of North Asia and a few South East Asian locations saw either stable or increasing capital values. Capital values in Beijing and Jakarta recorded the largest q-o-q increases, increasing by 17.1% and 14.7%, respectively. Hong Kong, Shanghai and Bangalore followed with quarterly increases of 4.6% to 9.1%.

We expect leasing demand to remain solid this year, while vacancies are still set to rise in some markets over the next few quarters due to ample supply additions. Consistent with strong fundamentals, growth of up to 45% is expected across the region for the full year, with the strongest growth likely to be seen in supply constrained markets such as Hong Kong, Beijing and Jakarta. Rents in Tokyo are forecast to correct until end-2011 with an annual decline of up to 5% as corporates are under strong pressure to save on costs. A few other laggards are also likely to see either no growth or some residual rental declines.

Capital values are expected to increase in nearly all markets outside of North Asia during 2011, by up to 45% for the full year, on the back of rental growth and investor confidence. Markets expected to see the strongest growth include Hong Kong, Jakarta and the China Tier I cities. 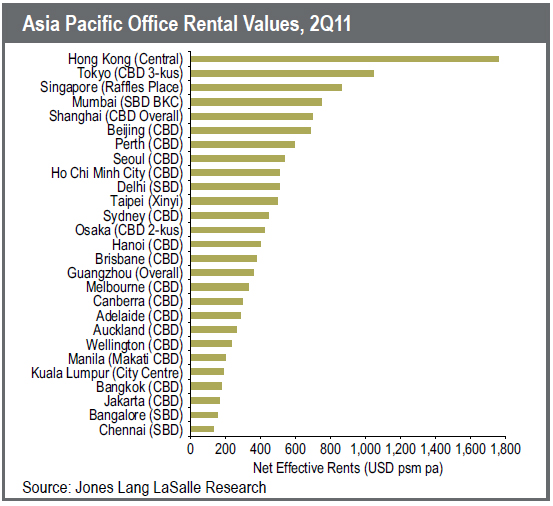 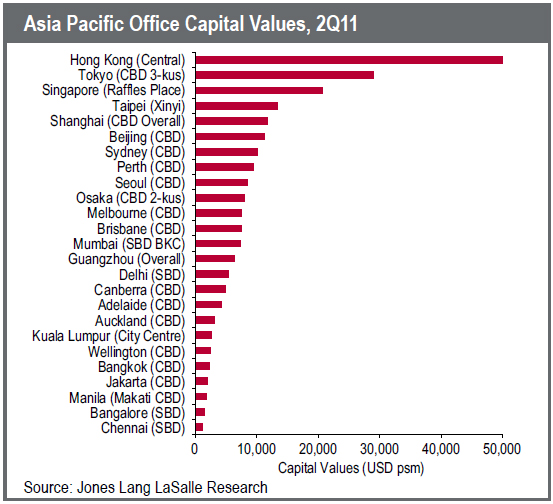 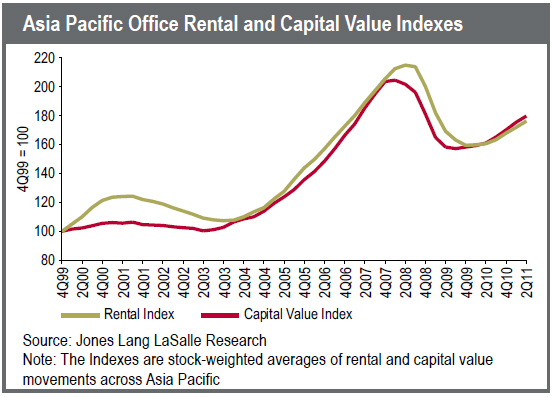