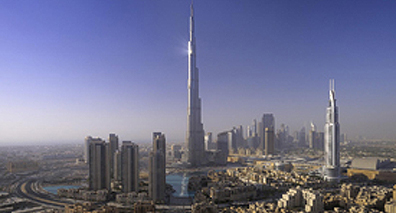 
According to STR Global, demand growth in Dubai's hotel industry was up 16.5 percent year-to-date August compared to the previous year.

However, demand growth in terms of total rooms occupied and new hotel supply were unequally spread between all six segments tracked.

Demand and Supply, by market segment, year-on-year percentage change for the year to August 2011 v 2010 (Ranked by growth in demand) 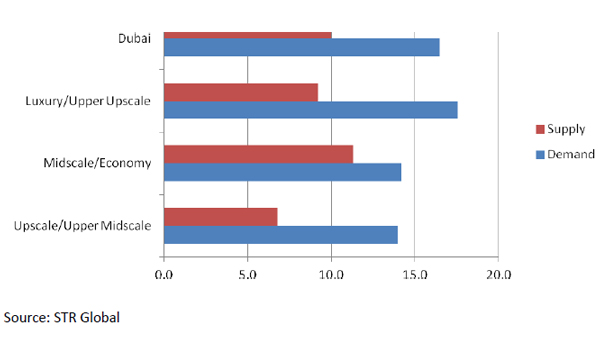 Demand growth in Dubai was led by the Luxury/Upper Upscale segment (+17.6 percent) as moderate new hotel supply (+9.4 percent) resulted in average room rate growth by 3.1 percent (AED940.87). In contrast, the Midscale/Economy segment experienced the strongest new supply growth (+11.3 percent) year-to August compared to the previous year. Branded Economy and Midscale hotels have been growing in the past few years as Dubai diversifies its hotel offering, which was until recently focused mainly on Upscale to Luxury segments. The additional new supply in the Midscale/Economy segments combined with slightly lower demand than the market resulted in an average room rate decline of 2.7 percent and the lowest absolute level of occupancy at 69.0 percent.

"The Dubai hotel market has managed to leverage its strategic location as a hub between continents and was valued as a safe destination during the Arab Spring", said Elizabeth Randall, managing director of STR Global. "In addition, modern infrastructure, new hotel inventory and delayed openings have allowed the market to balance supply and demand. This is good news for hoteliers who can now build their occupancy and rate".

Future trend from the STR Global Hotel Forecast for Dubai indicates that RevPAR growth is anticipated to reach between 8-9 percent by the end of the year. Demand growth for the full year is expected to remain positive, close to 15 percent, as international visitors continue to grow beyond 8 million by the end of 2011. In 2012, new supply growth is expected to reach 9.6 percent, causing both rate and occupancy to slow down. Pipeline data from STR Global indicates that 13,000 rooms are under construction in Dubai and another 21,000 have been announced.