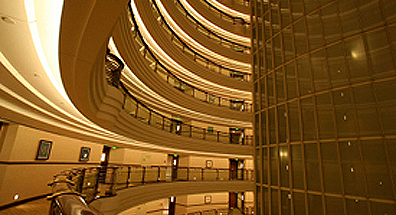 According to STR Global, the Americas region recorded positive results in the three key performance metrics when reported in U.S. dollars for March 2011.

The Americas region ended February with a 5.8-percent increase in occupancy to 61.6 percent, average daily rate was up 3.9 percent to US$104.90, and revenue per available room rose 9.9 percent for the month to US$64.62.

Among the key markets in the region, Santiago, Chile, experienced the largest occupancy increase, rising 73.9 percent to 84.6 percent, followed by Mexico City, Mexico, with a 14.0-percent increase to 67.0 percent. Sao Paulo, Brazil, fell 7.5 percent in occupancy to 66.6 percent, reporting the largest decrease in that metric, followed by New York, New York, with a 4.1-percent decrease to 78.2 percent.

Performances of key countries in March (all monetary units in local currency): 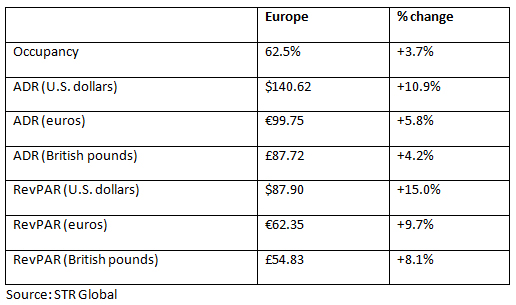 "The Europe hotel industry reported solid performance during the first quarter of 2010, continuing its steady growth with gains in occupancy and average room rate", said Elizabeth Randall, managing director at STR Global. "All European subregions achieved occupancy and rate growth for the month and the quarter".

Highlights from key market performers for March 2011 include (year-over-year comparisons, all currency in euros):


Performances of key countries in March (all monetary units in local currency):

"Hotel performance across Northern Africa and parts of the Middle East continue to be influenced by events in the region", said Elizabeth Randall, managing director of STR Global. "The most significant monthly RevPAR declines (in local currency) of the countries we track were reported in Bahrain (-79 percent) and Egypt (-68 percent). Occupancy is the main driver of the declines, as both markets reported occupancies of only 25 percent.

"Despite these events, the Middle East/Africa region again achieved the highest average room rate of the four world regions (US$176) and ended the first quarter with a slight RevPAR growth resulting from declining occupancy levels and growing average room rates. The declining occupancy levels should be a temporary feature, and we expect to see improvement as soon as the political situation in each country stabilizes".

Highlights among the region's key markets for March include (year-over-year comparisons, all currency in U.S. dollars):


Performances of key countries in March (all monetary units in local currency):

Hotels in the Asia/Pacific region experienced mostly positive results in the three key performance metrics during March 2011 when reported in U.S. dollars.

In year-over-year measurements, the Asia/Pacific region's occupancy fell 3.5 percent to 66.5 percent, average daily rate increased 13.8 percent to US$144.04, and revenue per available room jumped 9.9 percent to US$95.77.

"This month we saw the impact of the earthquake, tsunami and its aftermaths on the Japanese hotel market," said Elizabeth Randall, managing director of STR Global. "Across Japan, occupancy declined 21 percent for the month in addition to a slight drop in average rate. Cities in the southern parts of Japan performed better than cities closer to the affected north-eastern area as people moved farther away from the threat of radiation exposure. Tokyo's occupancy moved from 83 percent in March 2010 to 55 percent this year, and its average room rate (-4 percent) dropped slightly more than the national average (-0.1 percent) to JPY14,181. Osaka's occupancy, in comparison, dropped only slightly by 2.8 percent to 81 percent, and its average rate increased 10 percent to JPY12,083. In the city of Sendai, where we usually track the performance of nine hotels, three properties closed and the March performance of six reporting hotels showed a decline of 23 percent in RevPAR.

"Asia/Pacific overall finished the first quarter 2011 with a level occupancy performance and increases in average room rate to gain 13 percent in RevPAR," Randall continued. "As we saw a strong demand recovery in 2010, we expect to see occupancy performance level out and average room rates grow. Asia/Pacific achieved the highest occupancy (64 percent) of the four world regions in the first quarter".


Performances of key countries in March 2011 (all monetary units in local currency):