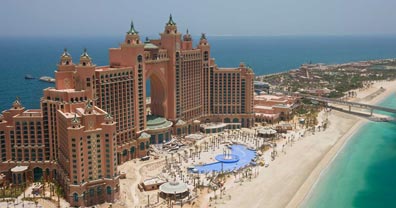 Global Hotel Performance in June Up in Most Markets, Says STR Report

According to STR and STR Global, the Americas region recorded positive results in the three key performance metrics when reported in U.S. dollars for June 2011.

Performances of key countries in June (all monetary units in local currency): 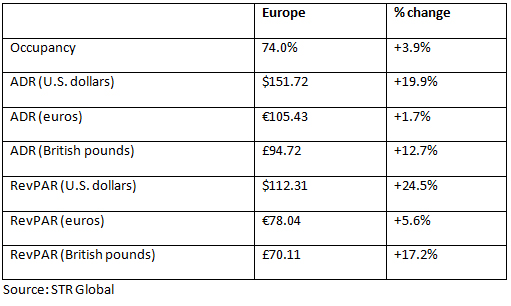 "Europe continued with its solid performance for the first six months of this year", said Elizabeth Randall, managing director at STR Global. "Across the region we saw equal increases in occupancy and ADR, resulting in a 9-percent RevPAR increase. Despite the reoccurring uncertainties in the wider economic environment, European hoteliers benefitted from the continued improvement in business, MICE and leisure demand".

Highlights from key market performers for June 2011 include (year-over-year comparisons, all currency in euros):


Performances of key countries in June (all monetary units in local currency):

The Middle East/Africa region reported decreases in all three key performance metrics during June 2011 when reported in U.S. dollars.

"As South Africa hosted the FIFA World Cup in June and July 2010, the results for June this year consequently are showing declines against last year", said Elizabeth Randall, managing director of STR Global. "Southern Africa reports a 35-percent RevPAR decrease, followed by Northern Africa with a 26-percent RevPAR decrease for the month. The Middle East (excluding Egypt) continued to report occupancy improvements with stable ADR results highlighting the strengthening of recovery across the region".

Highlights among the region's key markets for June include (year-over-year comparisons, all currency in U.S. dollars):


Performances of key countries in June (all monetary units in local currency):


Hotels in the Asia/Pacific region experienced mostly positive results in the three key performance metrics during June 2011 when reported in U.S. dollars.

In year-over-year measurements, the Asia/Pacific region's occupancy ended the month virtually flat with a 0.6-percent increase to 65.2 percent, average daily rate increased 13.3 percent to US$133.79, and revenue per available room jumped 13.9 percent to US$87.22.

"Asia/Pacific will be an interesting region to watch during the coming months", said Elizabeth Randall, managing director of STR Global. "Only two out of the six months so far this year reported occupancy increases against the corresponding month in 2010. Whilst the demand across the region continued to grow (2 percent for the first half of the year), the new supply entering the region (3 percent for the same timeframe) kept the occupancy levels under pressure. Added to that is the reduced demand due to the earthquake and tsunami in Japan and key events like the World Expo in Shanghai last year".


Performances of key countries in June 2011 (all monetary units in local currency):