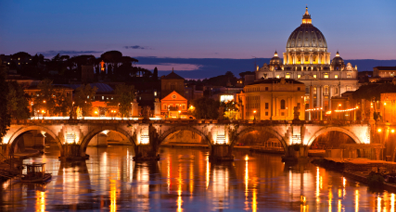 According to a new report by STR and STR Global, the Americas region recorded positive results in the three key performance metrics when reported in U.S. dollars for May 2011.

Performances of key countries in May (all monetary units in local currency):

The European hotel industry posted positive results in year-over-year metrics when reported in U.S. dollars, euros and British pounds for May 2011. 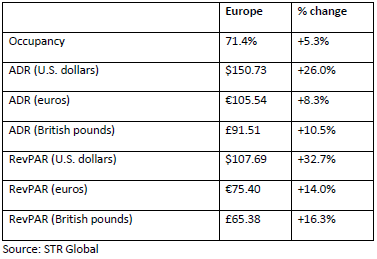 "European hotels continue to bring in good results across the regions", said Elizabeth Randall, managing director of STR Global. "Occupancy and average room rate grew 5 percent and 8 percent respectively for May. Supply growth remains subdued across Europe at 1.1 percent for the first five months coupled with demand improving 5.3 percent, which helps hoteliers to build revenue per available room. The year-to-date RevPAR of €61 is greater than the year-to-date results of the past two years, but still €6 below the YTD RevPAR achieved in 2008. We expect that, given economic conditions do not change for the worse, the recent solid recovery in occupancy and average room rates continues over coming months.

"Düsseldorf is the star performer this month, with high increases in occupancy and average room rates", Randall said. "Düsseldorf hosted the Eurovision Song Contest and Interpack trade fair which boosted the city's results".

Highlights from key market performers for May 2011 include (year-over-year comparisons, all currency in euros):


Performances of key countries in May (all monetary units in local currency):

The Middle East/Africa region (MEA) reported mixed performance results during May 2011 when reported in U.S. dollars.

"The political changes and demonstrations across parts of Northern Africa and the Middle East continue to influence hotel performances", said Elizabeth Randall, managing director at STR Global. "The MENA markets reporting positive occupancy and average room rate increases for May are Jeddah, Makah, Medina, Riyadh and Dubai. Despite new supply still entering the Dubai market, May was the second consecutive month of moderate average rate increases since mid-2008".

Highlights among the region's key markets for May include (year-over-year comparisons, all currency in U.S. dollars):


Performances of key countries in May (all monetary units in local currency):

Hotels in the Asia/Pacific region experienced mostly positive results in the three key performance metrics during May 2011 when reported in U.S. dollars.

In year-over-year measurements, the Asia/Pacific region's occupancy ended the month virtually flat with a 0.2-percent decrease to 64.0 percent, average daily rate increased 13.5 percent to US$138.54, and revenue per available room jumped 13.3 percent to US$88.72.

"Supply increases outpaced demand for the first five months of this year growing 2.6 percent and 2 percent, respectively", said Elizabeth Randall, managing director of STR Global. "Therefore the occupancy levels across the region are down slightly by 0.6 percent, year to date. Occupancy continued to improve across Central & South Asia, Southeastern Asia and Oceania.

"Bangkok came back strongly in May from governmental protests last year", Randall continued. "Shanghai hosted the World Expo last year, which depressed the performance for this May. Tokyo continued to report weak performances against last year following March events".

Highlights from key market performers for May 2011 in local currency (year-over-year comparisons):


Performances of key countries in May 2011 (all monetary units in local currency):

Highlights from key market performers for May 2011 in U.S. dollars (year-over-year comparisons):