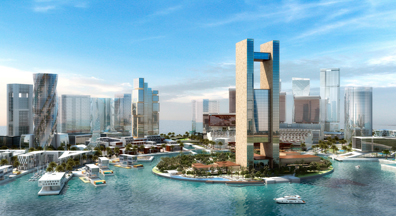 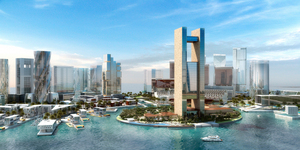 The Kingdom of Bahrain has signaled new optimism in the nation's employment and real estate sectors with the recent confirmation of construction work on the Four Seasons Hotel situated at Bahrain Bay - the country's highest-profile, master-planned $2.5 billion waterfront community.

Confirming the positive effects of the new development, Bob Vincent, CEO of Bahrain Bay Development, who will be coordinating the project's implementation tells World Property Channel, "The project is predicted to result in direct and indirect economic benefits for Bahrain that will equal approximately BD300m over the next five to seven years, which not only has obvious beneficial fiscal effects, but is also a very positive statement of confidence in the country as a business destination."

As the latest in the five-star chain's prestigious portfolio of international properties, the Four Seasons Hotel at Bahrain Bay will bring employment benefits to the nation's workforce, confirmed Vincent. "The commencement of the main contract for the Four Seasons Bahrain Bay is seen as an important commitment to re-invigorating construction in Bahrain and bringing a fresh focus to real estate lending by local banks" Vincent commented. "In addition, the flow-on effects of more than 2,000 jobs during construction; participation by local Bahrain sub-contractors and suppliers during the development and more than 700 permanent jobs; will all serve to demonstrate a turnaround in the Bahrain economy".

At 201 meters tall, 50-stories, and 263 guest rooms, the hotel complex is set to bolster Bahrain's hospitality credentials, and set a new standard in luxury accommodation. Complete with five-star spa and leisure facilities, suspended 'Sky Pod' restaurant, first-class banqueting and conferencing capabilities, four fine dining outlets, and panoramic views for guestrooms and suites, the project has been designed to lead Bahrain's hotel offerings into a new era. The project implementation will be coordinated by the Bahrain Bay management team, and as such the hotel's construction will exhibit the same leading-edge contemporary design and project management efficiency that has positioned Bahrain Bay as the country's highest profile waterfront community.

Bahrain Bay is the Kingdom of Bahrain's first master-planned mixed-use waterfront community, situated off the north-east coast of the capital Manama. The $2.5 billion development has a master plan created by New York-based Skidmore, Owings & Merrill, and has been designed to create a fusion of residential, commercial, retail, tourism, and community facilities and public amenities. It has three anchor developments - Four Seasons Bahrain, Arcapita Headquarters, and Raffles City Bahrain - reflecting the global standard the project is setting for the Kingdom. It was launched in 2006, and has seen uninterrupted progress, with 65% of land parcels already sold. It is scheduled for a multi-phase completion with initial phases to start being completed from 2012.