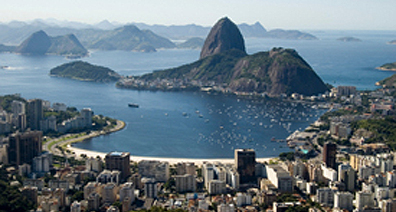 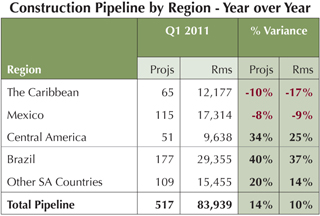 According to a new report by Lodging Econometrics , Latin America's construction pipeline increased for a fifth consecutive quarter to 517 projects/83,939 rooms at the end of Q1 2011. Totals have grown 14% by projects and 10% by rooms year-over-year and are at a two-year high. Except for Mexico and the Caribbean, all regional Pipelines bottomed in early 2010 and have been trending upward ever since.

Over 43% of the total Latin American pipeline, 219 projects/36,131 rooms, are presently under construction, with many projects anticipated to open in 2011 and 2012. Driven by increasing new project announcements (NPAs) into the pipeline, early planning totals have been escalating and are at a new cyclical high of 160 projects/24,799 rooms. Project totals for early planning now exceed those reached at the Q1 2008 pipeline peak by 28%.

Much of this boom has been driven by franchise company initiatives to expand brand presence in the rapidly growing region, chiefly in Brazil. Companies around the world are looking to gain a greater foothold here, in particular because of the global sporting events Brazil will be hosting over the next few years, the World Cup in 2014 and the Olympic Games in 2016. Fueled by these events and a booming economy, NPA's have been elevated for four quarters, raising Brazil's total pipeline to a new high of 177 projects/29,355 rooms, a level not seen since Q1 2009. Brazil now has the world's fourth largest Total Pipeline room count, following the US, China and India.

Other Latin America regions are also seeing heightened developer interest and, thus, rising pipeline counts. With increasing development in Colombia and Peru, the total pipeline for other South American countries combined has grown 20% by projects and 14% by rooms to 109 projects/15,455 rooms in Q1. Dominated by development in Panama, Central America's total pipeline increased to 51 projects/9,638 rooms, up 34% and 25% year-over-year, respectively. Meanwhile, hotel construction in both the Caribbean and Mexico remains in a bottoming formation and has yet to begin recover. At 65 projects/12,177 rooms, the total Caribbean pipeline held flat from the previous quarter, as did Mexico, with 115 projects/17,314 rooms.