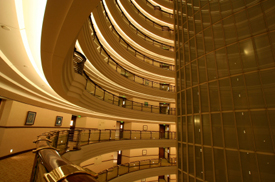 (PORTSMOUTH, NH) -- There is mounting evidence that the precipitous economic declines in many countries in Asia Pacific may be close to ending. A bottom is likely forming, hopefully to be followed by a modest recovery. Declines from the peak were caused mainly by the dramatic fall-off in the region's manufactured exports brought on by the worldwide recession and the drying up of cross-border financing. Like in other regions of the world, the new economic base line will be significantly below the 2007 highs.

To halt the decline, both China and India are making huge investments in infrastructure improvements and are counting heavily on rising consumer spending. China is also depending on a renewed emphasis in directed lending by its government-owned banks, particularly for real estate development, to generate additional job opportunities.

Construction Pipeline activity throughout the region peaked in the first half of 2008 in time for an expected rush of visitors for the Summer Olympic Games in Beijing, with China seeing a rash of New Hotel Openings in 2007 and 2008. Not surprisingly, Pipeline Totals in China have shown the largest percentage decline of any region in the world since the peak, down 22% for projects and 20% for rooms. However, China's Pipeline is still the second largest in the world with 964 projects/260,560 rooms under development. 65% of the projects are high-end hotels, primarily in the 25 largest cities. Most have global brands. 57% are larger than 200 rooms, with the overall average hotel size at a very high 270 rooms. 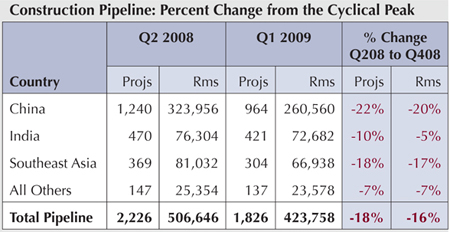 Significantly, 75% of China's Pipeline projects and 73% of rooms are already Under Construction, the highest ratio in the world. Most are planned to open in 2009 and 2010 in time for the 2010 World's Fair in Shanghai. Although New Openings will show a decline from the 2007/2008 pace, they will still be at lofty levels. Thereafter, lodging development in China is expected to moderate considerably, as the goal becomes the absorption of the unprecedented surge of New Supply that came online throughout the decade from a Pipeline seeded years earlier.

In contrast, India is considered to be under-roomed. The Pipeline is a modest 421 projects/72,682 rooms, having 23% of the region's project count, but just 17% of its rooms. Compared to other countries in the region, India's Pipeline contains a greater proportion of limited service, midmarket and economy hotels. New Openings are expected to increase year-over-year through the end of the decade for this recently seeded Pipeline.

There are a total of 441 projects/90,516 rooms being developed in other Asia Pacific countries at the end of Q1. Most are large, up market, globally branded hotels in the capital cities and resort areas of Southeastern Asian, chiefly Thailand, which has 104 projects/19,284 rooms. Vietnam has 60 projects/15,632 rooms and Indonesia has 49 projects/8,637 rooms.

Project Cancellations/Postponements set a new high in Q1 at 190 projects/39,730 rooms, reflecting the drying up of global lending and dampened developer sentiment due to decreases in global travel and the resulting occupancy and revenue declines in hotels already open and operating.

In China, 57 projects/15,173 rooms were cancelled or postponed in Q1. Nearly 70% of these projects were 200 rooms or larger. Significantly, 48 of the 57 projects had started construction and were halted.

India saw a surprisingly high 71 projects cancelled or postponed for Q1, 16 of which were already Under Construction. Many of the cancellations/postponements were projects smaller than 200 rooms. 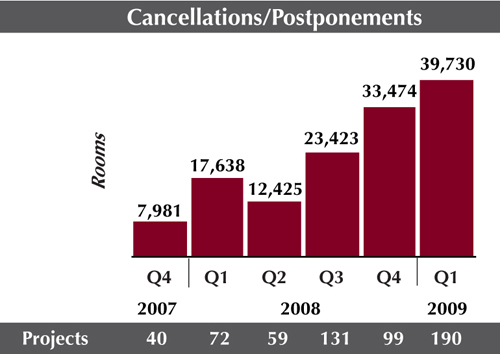 New Openings in the rest of Asia Pacific are also set to increase over the next two years, with 119 new hotels/21,662 rooms slated to open in 2009, and 140 new hotels/30,731 rooms in 2010. A majority of these are in capital cities and resort destinations in Thailand, Vietnam, Indonesia, and Malaysia. 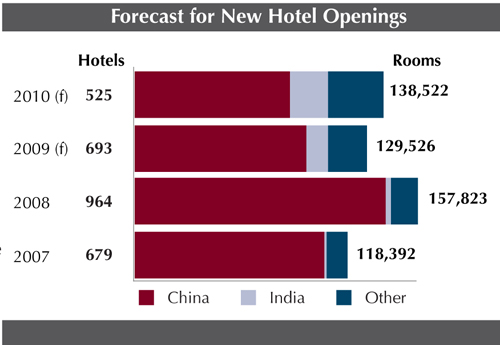