Asia/Pacific Regions
Hotels in the Asia/Pacific region experienced increases in all three key performance metrics for January 2010 when reported in U.S. dollars, according to data compiled by STR Global.
In year-over-year measurements, the Asia/Pacific region's occupancy rose 13.9 percent to 61.0 percent, average daily rate increased 5.6 percent to US$130.75, and revenue per available room jumped 20.3 percent to US$79.81.
"Hotels in the Asia/Pacific region lead the world in terms of occupancy recovery with double-digit growth in three out of the four sub regions and Australia & Oceania improving 3.2 percent", said Elizabeth Randall, managing director of STR Global. "The region achieved the highest occupancy of 61 percent, some 6.2 percentage points more than the Middle East/Africa region, 12.8 percentage points more than Europe and 15.5 percentage points more than the Americas.  Of the 16 countries we report on our Asia/Pacific Hotel Review, only French Polynesia, Japan, the Maldives and South Korea reported occupancy declines compared with January 2009".
Highlights from key market performers for January 2010: (year-over-year comparisons, all currency results in U.S. dollar)


Performances of key countries in January 2010 (all monetary units in local currency):

Europe
The European hotel industry posted mixed results in year-over-year results when reported in U.S. dollars, euros and British pounds for January 2010, according to data compiled by STR Global.
Figures for occupancy, average daily rate and revenue per available room ranged from double-digit losses to double-digit gains, depending on the market and the currency used for comparison.
Year-over-year January 2010 figures for Europe (U.S. dollars, euros and British pounds):

"Europe, like the Asia/Pacific region, is one of only two world regions that reported growth in occupancy for all their respective sub regions", said Elizabeth Randall, managing director of STR Global. "Whilst European occupancy stands at 48.2 percent--some 12.8 percentage points behind Asia Pacific--it reflects a continuing stabilization of market conditions, may it be on low levels".
Highlights from key market performers for January include (year-over-year comparisons, all currency in euros):


Performances of key countries in January (all monetary units in local currency): 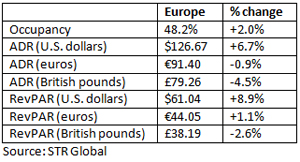 Middle East/Africa Markets
The Middle East/Africa region reported decreases in all three key measurements for January 2010, when reported in U.S. dollars, according to data compiled by STR Global.
The region's occupancy in January fell 2.3 percent to 54.8 percent, average daily rate decreased 1.9 percent to US$170.20, and revenue per available room decreased 4.1 percent to US$93.23.
"The African sub regions are the ones boosting the overall results for the Middle East/Africa region, which is partly due to exchange rates," said Elizabeth Randall, managing director of STR Global. "But the Middle East still achieved the second highest RevPAR of all the world sub regions at US$120, surpassed only by the Caribbean with US$128.
"Overall, the Middle East/Africa region continues to be one of two regions that still reports declines in RevPAR", Randall continued. "It is good to see the decline is getting smaller, from -7 percent in December to -4 percent for January compared to the prior year. Therefore, we still expect the region to follow on the recovery path that we set up last month".
Highlights among the region's key markets for January include (year-over-year comparisons, all currency in U.S. dollars):


Performances of key countries in January (all monetary units in local currency):