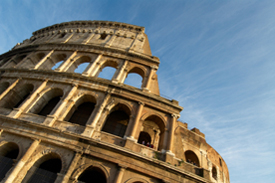 Occupancy in Rome showed an increase of 17.9 percent during August 2009 compared with the same period from the previous year. Florence and Naples both posted increases in occupancy rates for July and August, indicating that at least the leisure sector is gaining back some of the ground recently lost.

"Growth is back", said Marco Malacrida, director Italy for STR Global. "Italy entered the current recession in the second half of 2008, somewhat later than many others, and these figures could point the way to an earlier recovery certainly in the leisure sector. Corporate business is still suffering even if the Milan Fashion Week in September drew more visitors than in 2008".

These recent improvements need to be considered in a national and regional context. The performance for Italy year-to-date August 2009 shows a year-on-year percentage change in revenue per available room of -18.1 percent. This is not quite as bad as Europe's 19.4-percent decrease. Further indication of the scale of the problems facing Italy's hoteliers can be seen in the table below.

Year-on-Year Percentage Change for the year to August 2009 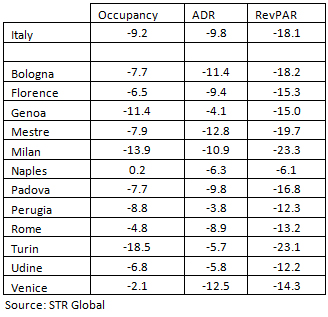 STR Global has recently introduced its STAR programme to Udine and Perugia in addition to its ongoing expansion of all Italian markets, in particular Naples, Genoa and Turin. "With the cooperation of the Federalberghi, Confindustria Alberghi and numerous hotel associations across the country, we have implemented revenue management training courses that have helped to spread the understanding of the importance of reliable and timely performance information in making the correct pricing decisions", Malacrida said.

Other markets that are in progress include more leisure-based samples covering the Adriatic Riviera, Sicily, Capri and the Amalfi coast, all to be launched shortly.

"We have been compiling data in Italy since 2001 and are delighted with the confidence the market places in us", said Elizabeth Randall, managing director of STR Global. "In the current downturn the value of competitive market data is becoming clear as it allows hotels to maximise their return on a bedroom dependant on the market conditions".