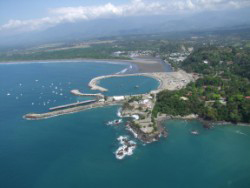 The 55-acre Marina Pez Vela project will eventually include more than 300 slips, ranging from 35 to 200 feet; dry storage facilities and a full-service boatyard, as well as 200 residential units. The first phase opening next month features 100 slips, with a wet slip priced at $175,000.

For a tropical country with a spectacular coastline known for its fishing, Costa Rica offers relatively few options for the boating world (and the population of boating second home owners). Last year, the ultra-lux Penninsula Papagayo in Guanacaste in north Costa Rica opened its own marina, the country's first catering to super-yachts.

Strict environmental regulations make it difficult to build anything along the Costa Rica coastline, nevertheless a marina. The Quepos project, which is only a few miles from Manual Antonio National Park, was the first project launched under guidelines of a law approved by the government to speed up marina development. That law was passed in 1998.

In the case of Marina Pez Vela, which has been in development for more than 10 years, demand for slips is driving the project more than the residential component.