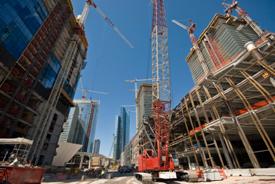 According to the October 2010 STR Global Construction Pipeline Report released this week, many markets are showing slight growth in new hotel development. Even with a weak global economy over the last year, certain markets like Brazil and Asia are accelerating construction of new hotels.

"The pipeline across the region has held steady compared to last month", said Elizabeth Randall, managing director of STR Global. "However, we see fewer hotels in the 'recently opened' phase because of the downturn last year and the slower revenue per available room recovery in the region. The United Arab Emirates, driven primarily by Abu Dhabi and Dubai, continued to dominate the number of projects in the total active pipeline among countries in the region". 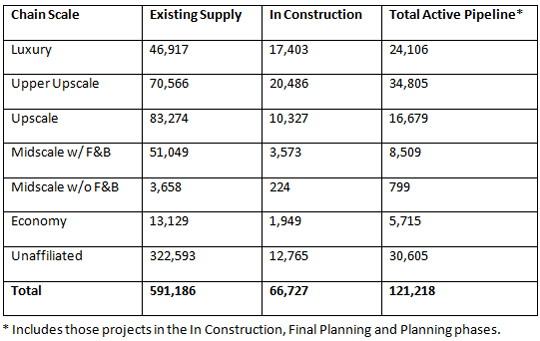 "The European pipeline remained relatively steady with just over 700 projects in October", said Elizabeth Randall, managing director of STR Global. "Interestingly, this month, the top four cities with the most developments are London, Moscow, Vienna and Berlin, which reflects partly the top three countries for hotel development: United Kingdom, Germany and Russia. The Austrian capital changed places with Berlin as London, Moscow and Vienna saw new projects entering the pipeline. It will be interesting to see how the European pipeline develops over the next few months. Revenue per available room recovery is expected to continue within a still risky economic environment and access to finance is still an issue for developers in some cases".

"While Brazil takes the lead with the most hotel projects in a country across Central and South America, it is Panama City, Panama, that dominates on a city level in the development pipeline", said Elizabeth Randall, managing director at STR Global. "The city benefits from a stronger recovery in Panama and a positive economic outlook due to the expansion of the Panama Canal. Panama City has 21 hotels in the pipeline, followed by Buenos Aires with six hotels and five hotels in the Brazilian markets of Rio de Janeiro and Sao Paulo".

Among the markets in the region, Panama City reported the most rooms in the In Construction phase with 2,468 rooms. Other markets that reported a significant number of rooms in the In Construction phase for the month include: Buenos Aires, Argentina (560 rooms); Lima, Peru (542 rooms); Bogota, Colombia (385 rooms); and Sao Paulo, Brazil (364 rooms).

Among the countries in the region, Mexico reported the largest number of rooms in the In Construction phase with 5,018 rooms. The Dominican Republic followed with 1,522 rooms, and Puerto Rico had 1,065 rooms. St. Lucia (245 rooms) and Turks and Caicos (220 rooms) were also among the top five countries with the most rooms in the In Construction phase.

"With a strong recovery in revenue per available room across Asia/Pacific, the region's pipeline has picked up and now holds 1,084 hotels projects", said Elizabeth Randall, managing director of STR Global. "We expect that in light of the current market and economic conditions, this trend will continue and the region will see further pipeline growth during coming months".