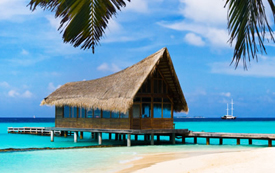 Ultimate Escapes, one of the largest luxury destination clubs in the world, filed for bankruptcy last week, the latest blow to the struggling residence exchange industry.

In a court filing, Florida-based Ultimate listed assets of $10 million to $50 million and debts ranging from $100 million to $500 million. Earlier this month chief executive Jim Tousignant told members the travel company was in default of a $90 million loan, Bloomberg reported.


Eighty-four affiliates of the company also filed for protection. The largest secured creditor is Capital Source, which is owed in the region of $97 million, Fractional Life reports.

The company says it is actively pursing the sale of assets or the "possibility of a stand-alone plan whereby members could acquire equity in the club."

While members don't receive equity in property, the destination club is based on offering members high level service and access to a wide variety of top-end properties.

"The need will always be there, and our member stories bear this out," Ultimate chairman Richard Keith told Luxist earlier this year.

But the industry has struggled in recent years, along with the overall fractional industry. Membership sales fell from $610 million in 2007 to $195 million in 2009, according to Ragatz Associates.

In an interview during the recent Fractional Life conference in Miami, Exclusive Resorts senior vice president Adam Wegner said his company is growing by focusing on its existing customer base, which now includes more than 3,500 members. Owned by AOL founder Steve Case, Exclusive members typically pay about $240,000 for a 20-day package, plus a $20,000 a year membership fee.

Ultimate was purchased in 2009 by Secure America Acquisition Company, which paid $186 million and then took the company public. After trading at $7.85 a share last year, its stock price fell to 21 cents last week.

Ultimate management has been looking for a sugar daddy to acquire the company for weeks, it acknowledged in a press release.

In a related action, Ultimate filed a complaint against competitor Club Holdings, alleging the Colorado-based company violated terms of a confidentiality agreement by soliciting its clients. Ultimate had approached Club Holdings about the possibility of an acquisition, according to published reports.