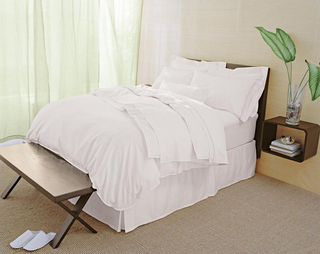 (SINGAPORE) -- A great night's sleep trumps great sex according to more than half of the Asian respondents (52%) to a new global survey of sleeping habits conducted by Westin Hotels & Resorts.  Just how desperate are we for sleep?  Well, 53% said they'd rather have a sleeping pill on their hotel pillow than the ubiquitous chocolate, and more than half of them (56%) take a relaxant, sleep or stress medication when traveling overnight.

Today, Westin Hotels unveils the results of a new global sleep study of more than 12,500 frequent travelers globally - a follow-up to a sleep study the hotel giant conducted a decade ago when it launched its now iconic Heavenly Bed.  When Westin debuted its revolutionary all-white bed, it spurred a global hotel bedding war that instantly made Earth tone polyester bedspreads and foam mattresses relics of old.  Millions of travelers have benefitted, and today most say that the quality of sleep on the road has gotten better. Many of those surveyed in Asia (60%) would go out of their way or pay more to stay at a hotel with their favorite bed, with about one in five Road Warriors surveyed saying that they were willing to pay USD100+ for a good night's sleep.

It's Mortgages, Marriage and Blackberry's That Keep Us Asian Travellers Up at Night

While good beds on the road may be easier to find, sleep itself can be elusive and our round-the-clock work life, today's economic woes and good old fashion relationship problems often get in the way of a good night's sleep.  To wit:

Honey, I have a headache said SHE - the Sex vs. Sleep Gender Debate

In the 10 years since Westin conducted its original sleep study, our desire for sleep has increased, and our sex lives have suffered.  Today more than 50% of frequent travelers in Asia prefer a great night's sleep to great sex, compared to just 31% who chose sleep over sex 10 years ago.

Other key findings include:

Hotel Beds in a Post-Heavenly Era


There is hope for the weary eyed...

Westin's commitment to sleep and wellness is evident in the sumptuous Heavenly Bed, and in the many Heavenly initiatives that have followed in the past decade.   Since the launch of the Heavenly Bed in 1999, the Westin brand continues to strengthen its commitment to bringing a little bit of Heaven to guests through new retail items and innovative programming and pledging to "help guests feel better when they leave than when they arrived." Wellness-inspired offerings introduced over the past decade included several more industry firsts: the high-performance WestinWORKOUT program and runWestin (a series of running concierges, maps, and amenities) in 2005; Breathe Westin (a commitment to a smoke-free environment) and signature White Tea scent in 2006, and a SuperFoods menu in 2007.

As Westin celebrates the 10th year anniversary of the Westin Heavenly Bed, the brand kicked off a series of promotions and innovations.  Just last month, Westin introduced three additions to its well-loved Heavenly product line, and unveiled a new online retail experience complete with an interactive showroom and retail concierge.  Designed to elevate the senses, Westin hotel's growing Heavenly lifestyle brand now includes a Heavenly Bath Line created with Bliss Spa, a Heavenly Travel Blanket, and a Heavenly Robe that recently debuted at its growing collection of Heavenly Spa by Westin.

Westin is also hosting Heavenly White Sales and experiential events in high-profile locations worldwide.  From Beijing to Boston, every one of Westin's 169 properties and more than 29,000 employees will participate in the celebration with special events, Heavenly promotions and giveaways.  The brand is also recognizing the hard-working room attendants who've kept the luxurious 10-layer beds beautiful over the years, and will also offer meeting-planner incentives around the Heavenly theme.

This study is based on a survey conducted by StudyLogic, LLC via telephone through RDD of adults who are executives, professionally employed, and with an average of 2+ business and leisure trips per year.  Study results are representative of each country's population of Executives. Twelve countries were surveyed: Australia, Canada, China, France, Germany, India, Italy, Japan, Mexico, Spain, the United States, and the United Arab Emigrates.  There were approximately 1,000 people surveyed in each country, with the exception of the United States, which had approximately 1,500 people.  Combined percentage breakdowns for all twelve countries based on various categories are available at the end of the report.  The survey consisted of thirty-three questions, some of which contained multiple parts.  Due to cultural reasons, certain questions were modified or omitted for Japan and the United Arab Emigrates, and any change or omission is indicated in the following report.  Interviews were conducted between June 15th and July 15th, 2009. The survey averaged 18 minutes in length and contains a margin of error in the totals of +/-3%.

Westin Hotels & Resorts, with 169 hotels and resorts in more than 31 countries and territories, is owned by Starwood Hotels & Resorts Worldwide, Inc. (NYSE: HOT).  Starwood Hotels & Resorts Worldwide, Inc. is one of the leading hotel and leisure companies in the world with 960 properties in 97 countries and 145,000 employees at its owned and managed properties. Starwood Hotels is a fully integrated owner, operator and franchisor of hotels, resorts and residences with the following internationally renowned brands: St. Regis®, The Luxury Collection®, W®, Westin®, Le Méridien®, Sheraton®, Four Points® by Sheraton, and the recently launched Aloft®, and Element SM.  Starwood Hotels also owns Starwood Vacation Ownership, Inc., one of the premier developers and operators of high quality vacation interval ownership resorts.