The past year has been among the most turbulent in the history of Venezuela. The death of Hugo Chavez in March left the presidency open to a national election, which was won by less than 2% of the vote by Nicolas Maduro, Chavez's chosen successor. Lacking the support that his predecessor had, his legitimacy is being challenged both by the opposition as well as within his own party. Reports have surfaced of growing divisions between the Socialist Party and the military, as well as reports of a growing rivalry between Maduro and Diasdado Cabello, the head of the National Assembly, who as a former military officer who enjoys much broader support and also has presidential aspirations. 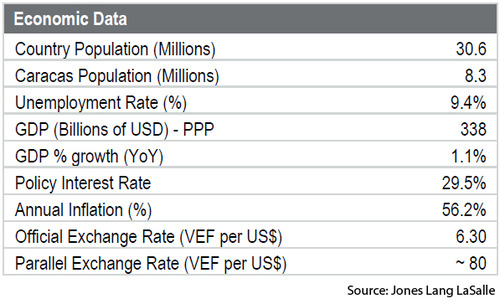 Unlike Chavez, Maduro hasn't had the luxury of starting his term with high oil prices and high demand to finance his administration. Recessions in the US and Europe - though they appear to be nearly over - have led to a decline in oil exports and prices in Venezuela.  In a country where oil revenues account for 40-50% of fiscal income and 90% of foreign exchange, this led to a steady dwindling of foreign reserves as the government continues to fund social programs but without the revenue it had a decade ago. In November 2013, Venezuela's international reserves were USD $21 billion, their lowest since 2004, and enough to cover about 5 months of imports. Consequently, the government has reverted to a policy of import rationing that has fueled the skyrocketing inflation rate we are seeing now.

Two key factors are contributing to high inflation and rationed imports. The first is that price controls, widespread expropriations of private businesses, and an arbitrary legal environment have discouraged productivity. Many companies have simply decided that it is not profitable to operate, and total output has declined as a result. The second is that many companies are unable to obtain dollars to pay their international suppliers, and therefore many have ceased or drastically cut down production. The government has set up an exchange to transfer dollars to the private sector, known as the SICAD. However these allocations have been highly inefficient and slow, with some companies waiting 9-12 months to receive the dollars they need to pay their suppliers. The result has been an across-the- board scarcity of basic consumer and household goods.

In February of 2013 Nicolas Maduro devalued the currency 32% from 4.3 BEV/USD to 6.3, via an injection of money supply by the Central Bank.  While it provided some fiscal relief, it complicated life for people and businesses by driving inflation up to between 50-60% by Q3. The combination of accelerating inflation and a fixed exchange rate regime have resulted in a severely overvalued currency. Analysts are expecting another devaluation of the official exchange rate to come this year, within the range of 8-9 BEV/USD. This should boost fiscal revenues, correct for some of the overvaluation, and ease pressure on imports. 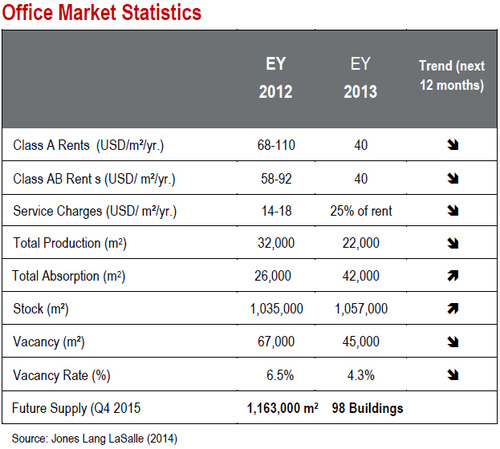 In the context of rising inflation and restrictions on currency exchange, much of the new money supply has been used by people to buy dollars on the black market. This has pushed the price of the dollar up sharply on the parallel market, going from about 31 BEV/USD in August 2013 to over 80 BEV/USD by the end of 2013. The widening gap between the official and parallel exchange rate is disturbing since the parallel rate has become increasingly more credible than the official rate, further accelerating inflation and setting expectations of even higher inflation.

JLL says that these conditions have produced a negative real interest rate, meaning the inflation rate is far higher than the rate of return on lending money. This is discouraging people from keeping their money in banks. Instead, they are looking to buy material goods such as televisions and refrigerators that will maintain their value in the face of another devaluation. Investments in real estate assets have also been popular as a way to hedge against both inflation and currency devaluation.

In the face of growing social unrest and dissatisfaction, the government has responded by declaring "war" on the private sector rather than tackling inflation by easing supply side restrictions for businesses, thus allowing them to build their inventories back up. The government has maintained that inflation is the result of speculation, hoarding, and price gauging by profit-seeking business owners. To combat the problem, Maduro has doubled down on the policies of the past decade by passing an "Enabling Law" that gives him full power to intervene in the private sector by setting prices and limiting profits. Last December the government began forcing shops to cut prices to arbitrary levels, starting with household durable goods and then moving on to input products like auto parts and metals.  The response was lines of hundreds of shoppers in stores waiting to buy durable goods, and then total anarchy as they grew tired of waiting and simply pillaged stores of their inventories. Moving forward, it is quite possible that the government will move into increased nationalization of the retail sector in the face of private sector disillusionment.

JLL reports that the Government control has extended into the real estate sector. A decree issued in November of 2013 mandated that rents for all types of commercial assets be capped at BEV 250/m2/month (about USD $40 at the official exchange rate). Building maintenance costs have also been capped at 25% of net rent.   While this decree makes it difficult on the supply side, there are also many people looking to invest in commercial real estate because it a safer place to store money at the moment than in the bank.

On the demand side, the market has been affected dramatically by the lack of hard currency.  Many companies who are unable to move any money out of Venezuela and are unwilling to keep it in banks where it will be eroded by high inflation and devaluation, are investing in bricks and mortar to protect their cash reserves. Some companies are purchasing whole buildings, for example the Seguros Horizontal purchase of Centro Empresarial Tamanaco and the Bolipuertos purchase of Torre 2RR. Others such as Avon Products, Iveco, and Marsh Inc. have purchased portions of buildings.  With the value of these properties on the rise, more companies are seeing real estate investments as the best of a range of suboptimal alternatives.

The office market in Caracas contains over 1 million m2 of prime space, making it one of Latin America's top business hubs. Stock is almost entirely distributed in the Central Business District along Avenida Libertador and Avenida Francisco Miranda. About 35% of the stock can be found in El Rosal, the strip just south of Caracas Country Club. To the east of El Rosal lies La Castellana with 25% of the stock; to the west is Sabana Grande with 25%; and to the south is Las Mercedes with 8%. The decentralized area of the Southeast, which contains the high-income suburban municipalities of La Trinidad, El Hatillo, and Santa Clara, has about 7% of the stock.

2012 saw about 32,000 m2 enter the market. The submarket that saw the most new supply was Southeast, which had about 13,000 m2 in two properties - Torre Tepuy Trinidad and Torre Xpress in Haitillo. La Castellana saw the delivery of nearly 12,000 m2 in a single building - Torre Financiera. Production was basically equal in 2013, with 5 new buildings totaling 33,000 m2. The southeast submarket again saw the most production with the delivery of Centro Comercial Loma Vista (6,000 m2) and Lomas del Sol (8,000 m2). 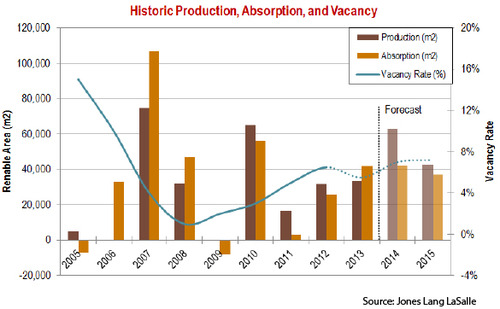 Caracas should see about 90,000 m2 in production between 2014 and 2015. A significant amount of this space will be acquired via sale, and approximately half of the new supply will be located in the submarket of La Castellana. The top properties under construction are the 20,000 m2 Paseo La Castellana and the 25,000 m2 Torre CAF, which will be the future headquarters of the CorporaciÃ³n Andina de Fomento (Latin American Development Bank).

Similar to other Latin American cities such as BogotÃ¡ and Lima, Caracas is experiencing a moderate trend of office decentralization with many new developments springing up in the suburban Southeast submarket. This is being driven by the availability of larger plots of land at reasonable prices as well as better security. A handful of the more notable properties are mixed-use office and commercial such as Centro Comercial Cerro Verde, Torre Xpress, and Paseo Haitillo. Still, the majority of new properties are found in the traditional CBD. 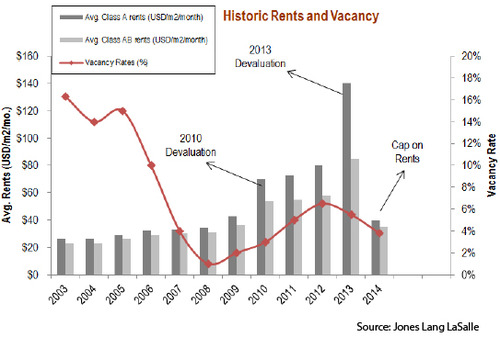 According to JLL, much of this year's absorption has been in buildings that have recently been delivered to the market mostly occupied and purchased by the user, such as C.E. Tamanaco and Torre 2RR. Absorption so far this year is estimated at about 42,000 m2, an improvement over the 25,000 m2 seen a year ago. One reason for this increase is that a handful of government entities have expanded into new buildings this year; JLL Research estimates that as much as half of the demand this year comes from the public sector. The other important component of office demand is companies who have accumulated large sums of Bolivares and are looking to invest them by purchasing their office since they cannot exchange them for dollars or move them out of Venezuela.

When viewed at the official exchange rate - the rate at which multinationals carry-out local accounting - rents jumped significantly after the 2010 devaluation, and again since the most recent devaluation in February 2013. Class A rents before the rent cap were between USD $100 - 450/mÂ²/mo., while Class AB rents were within USD $40 - 130/mÂ²/mo. 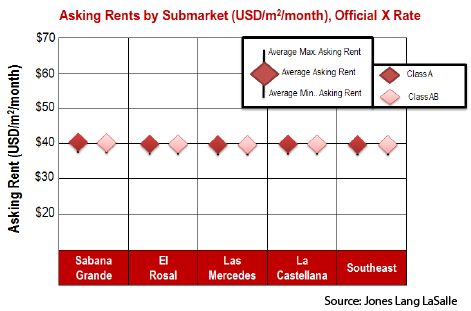 Maduro's decree has capped rents at USD $40/m2/month at the official rate. This will provide relief for tenants in the short-term, but it is likely to create supply side problems beyond that since property owners will have a difficult time earning the revenue streams that will justify building. The most expensive submarket remains La Castellana while Sabana Grande and the Southeast offer relatively lower rents.