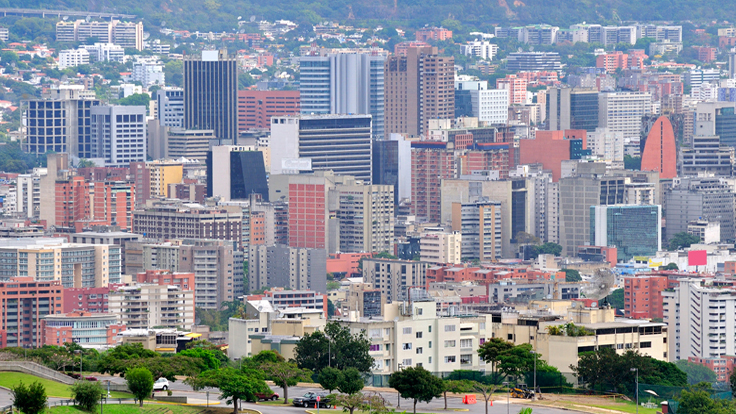 
Asking rents for offices in Caracas, Venezuela have skyrocketed, increasing 80 percent during the first half of the year compared to last year, new data reveals.

Average rents for Class A office space in Caracas reached $150 per square meter by mid-year, compared to an average of $20 to $35 per square meter in most other Latin American cities, according to research from Jones Lang LaSalle. The increase was due in large part to currency devaluation.

High rents in Caracas quoted at the official rate, which is paid by any company with business outside of Venezuela, are causing companies to look for alternatives, Scott A. Figler, a consultant with Jones Lang LaSalle, Latin America told WPC News. 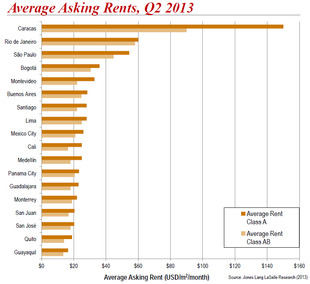 "Many companies are looking to purchase their office to hedge against inflation and future devaluations, since the currency restrictions are making it impossible to move cash outside the country," Mr. Figler said. "They would rather have their cash invested in bricks than let it erode in the banking system."

Venezuela is dealing with uncertain political and economic circumstances. The country's production of 18,000 square meters of office space and net absorption of 23,000 square meters during the first half of the year ranks it among the slowest markets in Latin America, JLL reports.

Demand is particularly strong for top office space. A report from research firm CBRE showed the average Class A asking rate in Caracas grew 63.2 percent during the second quarter of 2013 as supply could not match demand.

Other countries in Latin America are also experiencing increases in asking rents, although by lesser amounts.

"The overall trend for regional growth in average asking rates is slightly upward, [and] strong demand from international and domestic occupiers continues to drive rents," according to CBRE research. "However, the strong levels of demand have been offset by a very active development pipeline leading to a number of large construction deliveries and more options and availabilities for occupiers, as well as a slowing of economies within the region."

Rents are increasing in the Colombian cities of Bogota, Medellin and Cali, as well as in Lima and Guadalajara, where landlords have higher leverage due to a shortage in supply, JLL reports.

"In the case of Rio, there are geographic limitations -- mountains, water, etc -- that limit where construction can happen...the office sector is competing with hotels for prime space, which drives up rents," he told WPC News.

"In the case of Sao Paulo, rents are high because the city is so big and vast and access is so difficult, that areas with preferential location and good access... come with a substantial premium."

In contrast, office markets in San Jose, Buenos Aires, Santiago and Guayaquil have seen stagnant or falling rents due to oversupply or low demand, JLL reports. Panama has the highest office vacancy rate in the region at 30 percent, according to JLL.

A common trend of office decentralization is emerging throughout Latin American office markets.

"In certain cities, the gap between office rents in the Central Business District and office rents in other less consolidated submarkets has grown wide enough that it is inducing companies to leave the CBD," Mr. Figler said.  "We are seeing this especially in Bogota, Lima, Buenos Aires, Caracas, and Panama City."