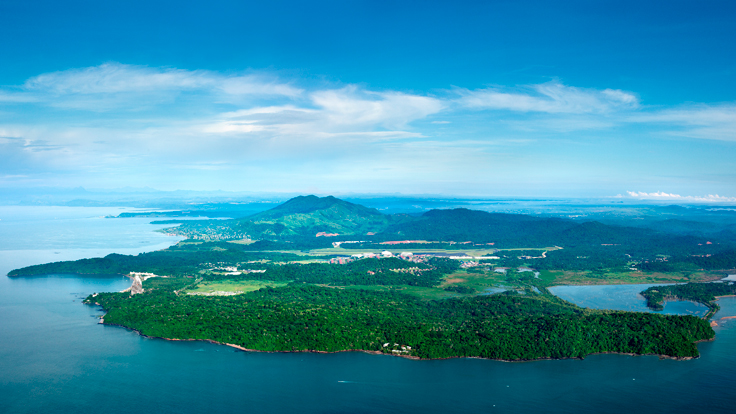 
Driving over the Panama Canal on the Bridge of Americas, it's easy to find Panama Pacifico, the six-year-old master-planned development on the west side of the canal.

The 3,450-acre project covering the site of the former Howard Air Force Base is one of the largest and most ambitious master-planned developments in the region. Plans call for more than 20,000 homes and acres of industrial, retail and office space, in one of the first large-scale attempts at a public-private partnership in Latin America.

"The public-private partnership could be a model for future development in the region..."

Panama Pacifico, which is being developed by U.K.-based London & Regional, is still in its early phases, but many sections are starting to take shape. Most of the initial development has focused on offices and the completion of 130,000 square meters of industrial space, which is occupied by such multinationals as Dell, 3M and Caterpillar.

"We started concentrating on easy wins," in the wake of the 2008 economic collapse, said Henry Kardonski, managing director of Panama Pacifico, in an interview with WPC News. "We tried to do less risky stuff."

As an industrial hub, Panama Pacifico, is already impacting the region.

"They have the most Class A industrial space in the market, by far," said Justin Boyar, a Panama-based consultant with Jones Lang La Salle. Panama Pacifico is designated as a special economic zone, offering corporate clients a menu of tax breaks and expedited services. "What I really like is they have a one-stop shop," Mr. Boyar said.

The residential portion of the project, launched at the height of crisis, has been slower to develop. About 270 residential units will be completed by the end of the year. Another 600 units should be finished in 2014.

A total of more than 800 units have been sold to date, including 400 in 2012, said Marco Ruiz, London & Regional's director of residential development.

But Panamanians were unaccustomed to the type of high-density neighborhoods in the development's first phases. High-end Panama neighborhoods are typically gated, with large backyards and swimming pools. Local buyers didn't understand the small alleys that connected the back of the units.

"Panamanians said, 'What kind of little road is this?' " Mr. Kardonski said.

Newer offerings incorporate more of the local sensibilities, with price points ranging from $160,000 for apartments to almost $400,000 for a single family home. More than 80 percent of the buyers are Panamanian.

At the same time, the mixed-use neighborhoods are "becoming real," said Jack Studnicky, a Panama real estate marketing consultant. Most of the development is focused around a town center, which is starting to look like many town centers in suburban neighborhoods in the United States. "The recreational and community involvement opportunities are being orchestrated perfectly and are the main reasons for the success of this new city," Mr. Studnicky said.

The international development community is closely following the progress of Panama Pacifico, which is promising to maintain 40 percent of the site as green space. Not only does the development provide a sales barometer for Panama, the public-private partnership could be a model for future development in the region.

London & Regional teamed with Colombian banker Jaime Gilinski to win an international competition to develop the site in 2007, in a process coordinated by the World Bank. London & Regional, which controls a portfolio of property around the world, is controlled by the brothers Ian and Richard Livingstone, described by one London paper as the "lowest profile billionaire siblings in London." The brothers own a wide range of luxury hotels and properties, but rarely make the newspapers, which is certainly a rarity for London billionaire siblings.

The company "realized that Panama, being an open dollar economy could compete with the Indias, Chiles and with Costa Ricas and Dominican Republics that are attracting investment," Mr. Kardonski said.

The government of Panama set up an independent group, the Panama Pacifico Agency, to oversee development of the land. Under the terms of the agreement, London & Regional was not required to buy the land upfront. Instead, the developers are on a "pay as you go" deal with the government. The developers pay for land as they build on it. They also pay a "contingent rate" to the government, which is calculated as 25 percent of the added value of the land.

London & Regional started construction in 2008 and was obligated to spend $60 million in the first two years to jumpstart the project, and a total of $405 million by 2015. The developers overall commitment is to spend $705 million on the project.

Over the next few years, the developer expects to build 35,000 square meters a year of industrial space and 12,000 square meters of office a year. Executives also expect to pick up the pace of residential, although they are paying careful attention to the timing and mix of new product. An active living senior community is one possibility, Mr. Ruiz said.

They are also adding more product geared toward the international buyers, which remains a key target market.

"We know it's going to turn around," Mr. Ruiz said "The demographics are there, they've always been there."

The developers hope several planned infrastructures projects will boost Panama Pacifico's position in the market, including a connection to Panama City's new metro system and a new bridge over the canal.

The developers have learned lessons from the initial phases, completed against the backdrop of the global economic upheaval, Mr. Kardonski said.

"You have to create value while you go and be careful with speed," he said.