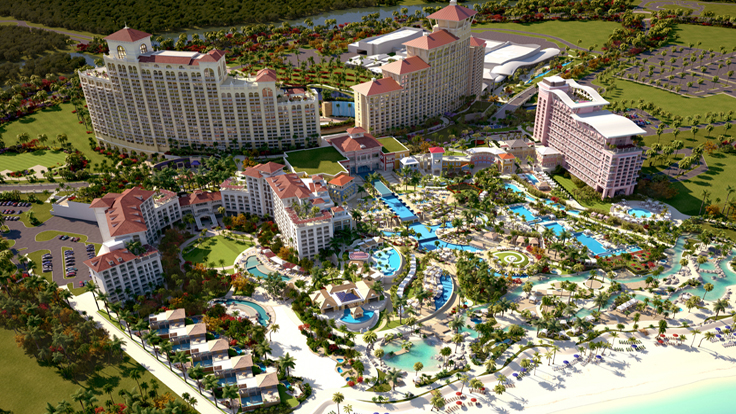 
When Baha Mar opens in the Bahamas next year, the $3.4 billion project will change the dynamics of the Caribbean resort market. With more than 2,200 rooms and the largest casino in the region, the project is large enough to siphon customers from others islands and compete with the Atlantis, the Bahamas' existing 3,000-room mega-resort.

To succeed, Baha Mar will need to attract new clientele and grow a market still rebounding from the economic collapse of 2008.

"This actually helps the whole destination be better known as a destination, not just a one resort location," president Tom Dunlap told WPC News.

"The 100,000 square foot casino puts us on par with Las Vegas casinos and Macau casinos. This is a truly destination casino. It is not just an amenity."

Baha Mar's not-very-secret weapon: China. The project is financed by $2.5 billion from the Export-Import Bank of China, and the China State Construction and Engineering Corporation is the general contractor. China State also took a minor equity position in the project.

Baha Mar will represent one of the first large-scale attempts to bring Chinese tourists to the Caribbean. But can Baha Mar attract significant numbers of new visitors from China? Or will the 2,200 new rooms simply cannibalize tourists from other resorts?

"If China can get the visa problem such that they can allow their citizens to travel more freely, it doesn't take much to fill up 2,000 rooms from China," said Scott Smith, senior vice president of PKF Consulting, which tracks the market. 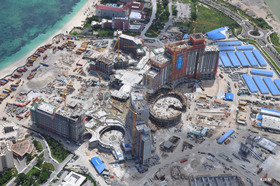 But if Baha Mar relies on new market growth, the project will "negatively impact the Caribbean in 2015, as far as other properties," Mr. Smith said. "They're probably going to discount rates. It'll be a rate war."

The Caribbean is a much different market than in 2004, when Bahamas businessman Sarkis Izmirlian started working on developing a project on Cable Beach. In 2006 Mr. Izmirlian sold a 43 percent stake to Harrah's Entertainment, but the U.S. company pulled out of the project in 2008, prompting lawsuits from Baha Mar.

Baha Mar was not the only mega-project struggling in the Bahamas at the time. Florida developer Bobby Ginn's attempt to build a $4.9 billion resort and golf complex with 1,400 homes on West End, Grand Bahamas, fell apart in 2008 when he defaulted on construction loans, resulting in another flurry of lawsuits.

But Baha Mar's fate changed with the entrance of the China conglomerates, which were actively developing construction projects in Latin America. The financing package was contingent on using China State as the construction company, a common arrangement for Chinese companies developing projects around the world. 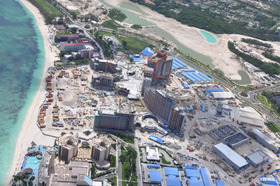 The deal was aided by the Bahamas government's commitment to spend $400 million on the expansion of Nassau's Lynden Pindling International airport and another $70 million to build a four-lane highway connecting Cable Beach to the rest of the island. The government also exempted the project from duties on construction materials and equipment under the provisions of the Hotel Encouragement Act.

The government "has been very hands on" in making Baha Mar a reality, Mr. Dunlap said. The development is projected to inject $1.1 billion in spending and direct taxes into the Bahamian economy in the first year of operation and increase the country's GDP by 10 percent.

Baha Mar will feature four hotels connected by a common podium - the 26-story, 1,023-room Baha Mar Casino and Hotel; the 26-story Grand Hyatt with 700 rooms; the 295-room Mondrian; and a smaller, 192-room Rosewood. The 2,200 rooms will add to the 1,250 rooms in the two hotels existing on the site, the Sheraton Cable Beach Resort and the Wyndham Nassau Resort.

"It really is a brand-centric product offering, which also differentiates it," said Mr. Dunlap, who spent 15 years working for the Walt Disney Company. Before joining Baha Mar, he was president of Revolution Places Development, the real estate arm of AOL founder Steve Case's company, where he was working on the $1 billion Cacique development in Costa Rica. 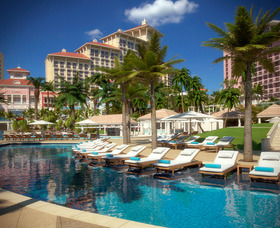 In addition to the hotel rooms and a Jack Nicklaus golf course, Baha Mar includes 284 residences spread across the project, priced from $1.5 million to $15 million for a four-bedroom villa with private pool in the Rosewood development. (Timeshares were part of the original plan, but the shared ownership plan was shelved, Mr. Dunlap said.)

Last year Baha Mar reportedly sold more than $100 million in property, with 50 of 307 units sold, according to Integra Realty Resources, a consultancy. The "vast majority" have been sold to non-U.S. citizens, a dramatic shift for the Bahamas, Mr. Dunlap said.

"In 2006 and 2007 we would have been marketing almost exclusively in the United States," Mr. Dunlap said. Instead the marketing plan includes London, Latin America, Asia and the Middle East.

"We opened sales through channels in London, Asia, Middle East and then into North America, fourth," Mr. Dunlap said.

Baha Mar is likely to take a similar global approach to attracting hotel guests to the Bahamas. The new airport will help bring more flights from Europe, as well as Asia, the developers hope. The Bahamas is already on the radar of the Middle East market - an investment arm of Dubai World controls a stake in the Atlantis.

After a lull, tourism to the Bahamas is rising, up 5.4 percent in 2012 to 1.4 million arrivals, according to the Caribbean Tourism Organization. Revenue per room was up 14 percent in Caribbean in first quarter of 2013, STR reports. 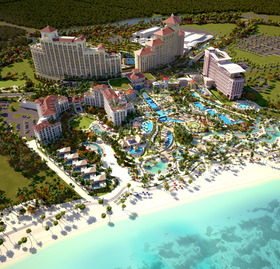 For Baha Mar, the casino will be a key draw. The next largest casino in the Caribbean is the Atlantis, at 50,000-square feet.

The 100,000 square foot casino, "puts us on par with Las Vegas casinos and Macau casinos," Mr. Dunlap said. "This is a truly destination casino. It is not just an amenity. It is the hub of the diagram."

While Atlantis relies heavily on families, Baha Mar will be positioned to a more adult clientele. In promotional materials, Baha Mar refers to the location as "the Bahamian Riviera."

The casino "allows us to draw people from new locations, Latin America, Asia, Europe," he said.

The casino and all four hotels are expected to open at the same time, likely by the end of 2014. Construction started in February 2011; the towers topped off earlier this year.

When completed, 400 acres will remain on the 1,000-acre site for future development.

"The appetite for different types of real estate products will evolve quickly," Mr. Dunlap said. "Five years from now there will be other great ideas and we have space to do that."