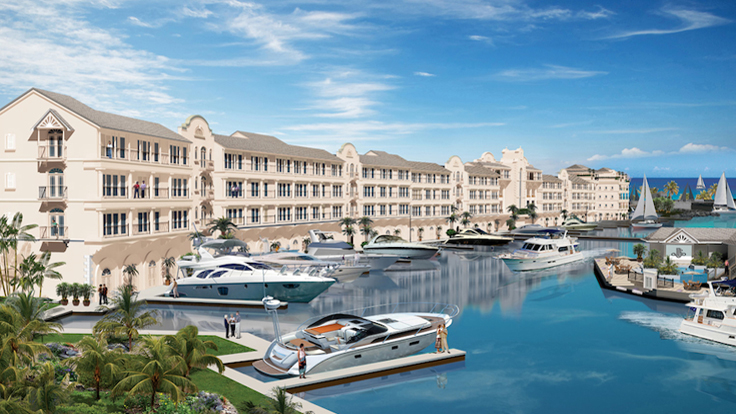 
Rising demand for marina berths in the Caribbean is fuelling new residential projects, prompting cautious optimism of a return to form for developments in the region.

Eight new marinas with a total of more than 500 berths are under development from the British Virgin Islands to Canouan, according to data from Camper & Nicholsons, the yacht company.

Port Ferdinand on the northwest coast of Barbados is one example of the latest marina-based development. When the marina opens this December it will provide 120 berths of 50 and 60 feet, as well as the first of 83 apartments.

Developers Unna have spent $80 million on the project to date and this month launched sales in phase one. Two and three-bedroom apartments with coral stone walls, modern bathrooms and open-plan living rooms overlooking the marina are priced from $2.1 million to $6.5 million with annual maintenance fees of $18,000.

Every apartment comes with a berth, yet the developer claims that what most appeals to buyers is the security and amenities on the gated 16-acre site.

Nevertheless, the boating community is a fertile market for developers. The world's fleet of super yachts -- boats over 100 feet - now numbers 4,600, an increase of 25 percent in the last five years says UK-based consultancy Marina Projects.  On average 200 new boats are delivered each year and many spend the Northern Hemisphere's winter months berthed in the Caribbean. 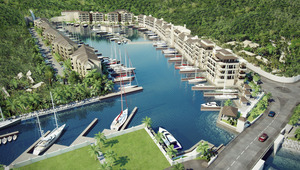 "Over the last three years we have seen an increase in marinas being built and a large increase in the number of super yachts coming to the Caribbean," said James Burdess, head of the Caribbean desk at real estate agency Savills. "There is a clear link with people buying property in order to acquire a berth for smaller yachts, too.

Barbados had little boat traffic until the first marina, Port St Charles, was built 15 years ago, Mr. Burdess said. "That project sold well and today the marina is full," he said.

Port St Charles, which neighbors Port Ferdinand, has 110 homes, each with its own berth and moorings for six super yachts up to 250 feet.

Port Ferdinand's progress is welcome news for the Barbados' development community. Several high-profile projects have stalled on Barbados in the past five years including Beachlands and the troubled Four Seasons Resort, both on the prized west coast.

Property prices on Barbados remain flat and off-plan sales difficult, but there are reasons for optimism, says Terry Hanton of Altman Real Estate.

"High-end developments like Port Ferdinand and a handful of new projects in embryonic planning stages show positive signs for the island," Mr. Hanton said. "After two extremely quiet years this summer was surprisingly busy for viewings."

A U.N. Economic Commission report in June 2013 acknowledged that one of the most significant factors holding back growth in the yachting sector across Latin America and the Caribbean is the lack of proper marina facilities.

The owners of Puerto del Rey Marina in Puerto Rico, billed as the largest in the Caribbean, recently announced a $450 million renovation.

"There are opportunities for further marina developments but generally only in more remote areas," Mr. Houlgrave said. "An issue, of course, is the weather. Anywhere north of 12 degrees is considered to be in the hurricane zone which often precludes large-scale development because of the high cost of insurance."