STR Global is reporting hotels in Brazil have experienced declines in revenue per available room as they prepared to host the FIFA World Cup, which began this week. The country's performance is following a similar trend observed by other host countries, including Germany and South Africa. 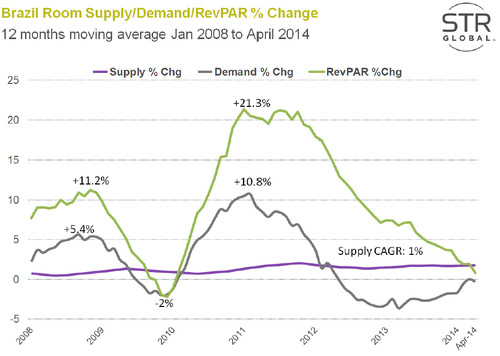 South Africa saw sharp declines in occupancy before the start of the World Cup, which was mainly driven by an increase in room supply and average-daily-rate growth. Brazil's year-to-date performance has declined due to lower occupancy levels during March and April. After experiencing low rates at the start of the year, Brazil has increased ADR, partly as a positive result of the Carnival.

The overall supply trend for Brazil shows a countrywide supply compound annual growth rate (CAGR) of 1.0 percent since 2008. The supply growth has been flat since 2008, and the country has not seen any sharp rises leading up to the World Cup or the Olympics. Since 2012, Brazil has seen a decline in demand following a positive trend of growth for more than two years. 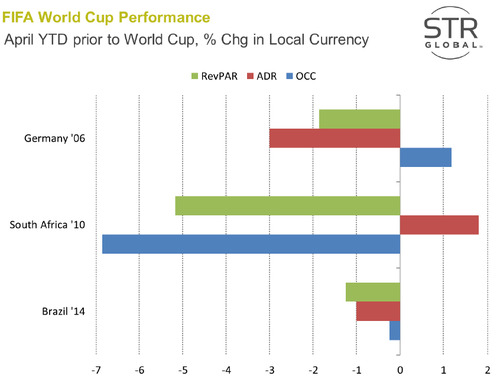 Despite the historical supply growth, the Under Contract Pipeline of the country recorded an additional 21 percent supply on top of existing supply, of which 23,600 rooms are projected to open by the end of 2015. Sixty-nine percent of this growth is allocated amongst the Economy, Midscale and Upper Midscale classes. International hotel brands are increasing their portfolios in Brazil, with projects not restricted to main tourism destinations or large cities, but also converging smaller city destinations that have significant growth potential.