The government of Abu Dhabi is creating a financial free zone on Al Maryah island, hoping to lure international companies away from similar financial centers in Dubai, Qatar and Bahrain.

The Abu Dhabi World Financial Market will offer companies a variety of incentives to set up offices in Al Maryah, including the ability to operate without a local business partner, easily ship money out of the country and work under international laws.

It would be a direct competitor to the nine-year-old Dubai International Financial Centre, a 90-minute drive away, which successfully developed Dubai as a center for the regional financial community. Among other advantages, the DIFC established its own court system, which has won praise for bringing Western-style legal proceedings to disputes within the financial center's jurisdiction.

The Abu Dhabi World Financial Market will officially brand the 114-hectare Al Maryah development as the capital's financial center. Formerly known as Sowwah Island, the project is home to the new headquarters for the Abu Dhabi Stock Exchange.

"I can tell you that all the local Emirati investors are talking about [the financial zone]," Fathi Ben Grira, the chief executive at Menacorp, told The National. "All the big international financial institutions would love to be in Abu Dhabi, because of its stability. There is a general perception that they can seize opportunities in terms of business." 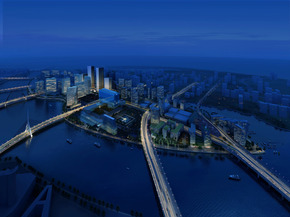 The competition for international financial companies has intensified in recent years, with Bahrain and Qatar aggressively pursuing Middle East operations. Abu Dhabi and Dubai both offer several free trade zones, but Dubai has been the leader in attracting the regional finance and banking industry.

"I don't think [the Abu Dhabi World Financial market] necessarily is competition for the DIFC," Kai Schneider, a partner at the law firm Latham & Watkins in Dubai, told Dow Jones. "If you use Europe as a model, there's room for more than one financial center in a region and each financial center can focus on a separate sector of financial services. London is asset management, Luxembourg is where funds are domiciled and Ireland is where they're administered."

The specifics of the Abu Dhabi zone still need to be worked out, industry observers note.

"For now the first steps have been taken to build a legal and regulatory framework," Nick Clayson, a partner at the law firm Norton Rose in Abu Dhabi, told Dow Jones. "But it's not clear whether any particular laws, regulations or the judicial position will be the same as the DIFC."