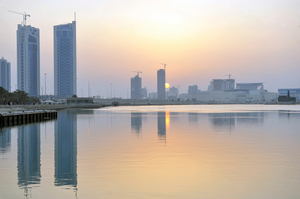 According to the 2011 year-end data from STR Global, a year since the beginning of the Arab Spring, demand has yet to return to Egypt, Bahrain and the Levant region.

In Cairo, Egypt, where protests have been widely broadcasted, occupancy declined by 29.5 percentage points to 36.1 percent in 2011 and average daily rate (ADR) declined by 3.3 percent to EGP706.26. In the usually popular leisure destinations of Sharm El Sheikh, Egypt, and Hurghada, Egypt, occupancy reached 48.1 percent (-38.6 percent) and 57.2 percent (-28.7 percent), respectively. Unlike Cairo, ADR decreased more in Sharm El Sheikh (-17.3 percent) to EGP333.69 and Hurghada (-6.2 percent) to EGP329.15, as hoteliers tried to maintain demand volume by lowering rates.

In the Levant region, demand declined in the main cities such as Beirut, Lebanon (-12.2 percent), and Amman, Jordan (-6.8 percent).

It resulted in a RevPAR drop by 22.2 percent in Beirut and 9.2 percent in Amman, despite that most of the unrest has been taking place in Syria and Egypt.

On the Arabian Peninsula, Manama, Bahrain, experienced the strongest demand decline across the region following the February political unrest in the country. As a result, occupancy and rate declined by 37.6 and 12.9 percent, respectively, year-to-December 2011, reporting 41.6 percent occupancy and BHD77.44 ADR. 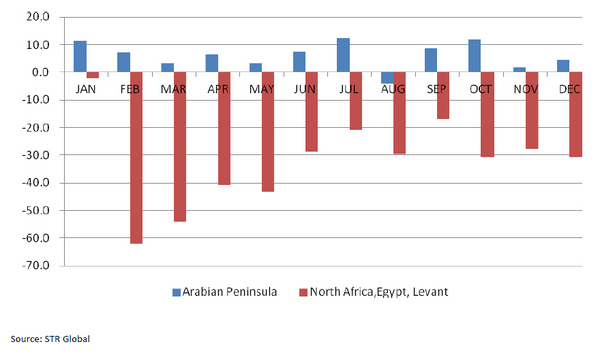 "A sense of insecurity across Northern Africa and Egypt has led leisure and business travelers to seek alternative destinations. As a result, hotels in the Arabian Peninsula saw demand increase by 13.2 percent", commented Elizabeth Randall, managing director at STR Global. "Security in the region will be vital before expecting large numbers of tourists to return. The good news in the 2011 performance is that average rate across Northern Africa, Egypt and the Levant region has remained on par with the previous year (-0.5 percent in USD) and declining occupancy has started to show signs of stability in the second half of the year".