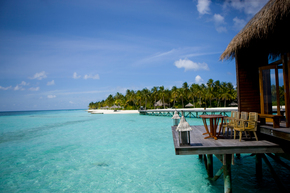 "Both the Maldives and Mauritius have been influenced by the state of the economic activities thousands of miles away", said Elizabeth Randall, managing director of STR Global. "With the main source of travelers coming from Europe, Mauritius' RevPAR growth has been mostly influenced by the Eurozone debt crisis, foreign exchange rates and increasing airfare duties. In the Maldives, whilst demand from European visitors declined, the emergence of growing wealthy Chinese travelers has benefited hotels to remain one of the top luxury destination around the world".

Hotel supply increased by 2.0 percent in the Maldives in 2011 and continued to increase by 3.2 percent during the first five months of 2012, compared to the same period prior year. During the same period, demand grew by 10.2 percent in 2011 but declined by 3.8 percent to May 2012. The decline was the combined result of a short-lived new legislation aimed at banning hotel spas at the end of the year 2011, creating a very unpopular reaction amongst travel agencies and foreign travelers. Whilst later on the new rule was overturned, by February the political unrest in Male threatened the peaceful image of the remote islands. These uncertainties affected demand year-to-May 2012, leading occupancy to decline by 6.8 percent to 66.9 percent. The good news is that average daily rate (ADR) increased by 19.1 percent to â¬567.78 year on year (+31.4 percent in local currency or +7.8 percent in Chinese Yuan Renminbi) as Chinese visitors, who have become the main source market for the islands, compensated for the declining European demand including visitors from the U.K.

Located 2,100 miles south-west of the Maldives, Mauritius, with more than 12,000 available rooms, has seen a different growth pattern than the Maldives with demand mainly coming from Europe, especially France.  With occupancy at 71.3 percent (+1.9 percent) year to May 2012, ADR increased by 2.1 percent in local currency to MUR6,689.66 (+ 6.5 percent in Euro) compared to the previous year. The ADR growth was mainly led by an increase in the local currency against the euro over the previous year. New developments from both Centara Hotels & Resorts and St. Regis (Starwood Hotels & Resorts Worldwide) expected to open this year, will be adding an additional 355 daily rooms on the island.

STR Global is tracking more than 2,800 rooms in The Maldives and 3,600 rooms in Mauritius.