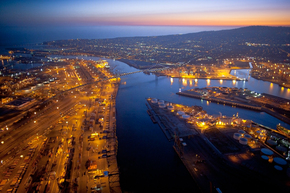 The Southern California industrial real estate market has been recovering for the last 18 months and a number of major developments have been built in Los Angeles, Orange County and the Inland Empire, says Kurt Strasmann, senior managing director for CBRE's Orange County region and Southern California industrial functional leader. Among the large industrial facilities built during this period is the $250 million North American Operations Center for the Skechers shoe company, located in the Moreno Valley, approximately 60 miles east of Los Angeles in the Inland Empire.

"We are tracking close to 20 active transactions with companies that are looking for space in excess of 500,000 square feet," and because there isn't much existing space, there is a lot of spec development going on, says Strasmann.

But the Southern California industrial real estate market is not completely healed. "Corporate America is doing well, while the smaller, regionalized guys are struggling, so (development and leasing) is mostly (confined to) large facilities," says Strasmann. The large, industrial players are consolidating to save money, so there is no net growth, he says. "Skechers consolidated a year ago and all the large requirements (for large spaces) are going to the east (the Inland Empire), where more land is available," he says.

The overall industrial vacancy rate in the Southern California region is about 4.5%, says Strasmann. "The (large) high quality space is getting leased up, while the smaller spaces are struggling," he says.