Manhattan office leasing levels improved in February, led by a 45 percent increase in activity in the downtown area compared to January, according to CB Richard Ellis' latest Manhattan Marketview Snapshot. 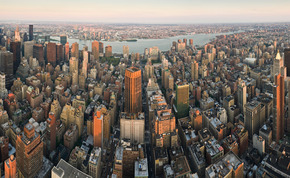 The bulk of the increase was downtown, where 580,000 square feet of space was leased in February, topping the five-year monthly average of 340,000 square feet by more than 70 percent, according to CBRE's report. During the first two months of 2013, downtown leasing activity nearly doubled the pace set during the same period last year.

In midtown, leasing totaled 830,000 square feet in February, falling short of the five-year monthly average of 1.14 million square feet by 27 percent, according to CBRE. This was the second consecutive month of below-average leasing in Midtown. During January and February, leasing was about equal to 2012 levels.

In midtown south, leasing activity was on par with the five-year monthly average of 330,000 square feet, after three consecutive months of below-average leasing, according to CBRE.  Year-to-date leasing lagged January and February 2012 by 15 percent. Several large blocks of space were brought to market during  February, driving negative absorption and a 40 basis point increase in the availability rate. The average asking rent went down by $.50 per square foot, during February, because of  new space on the market priced below the market average.