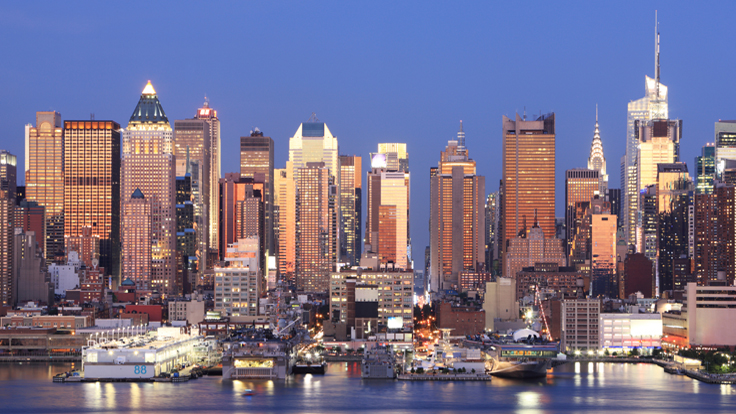 
The Big Apple remains the favorite target for property investors scanning the globe for deals.

Los Angeles showed the largest gains in the top 25 cities tracked by the report, moving into second place, ahead of Tokyo. San Francisco, Washington D.C., Hong Kong, Paris, Houston and Chicago round out the top 10. 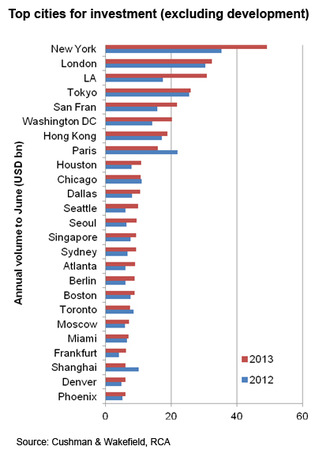 "The top cities continue to be popular across multiple sectors, although different cities tend to dominate different markets, with London the largest office market, Hong Kong top for retail, L.A. the largest industrial and New York winning out in multifamily and hospitality," the report says.

The biggest gainer in investments (excluding development) among the top cities were Austin, Milan, Las Vegas, Montreal and Tampa. The biggest declines were recorded in Paris, although Toronto and Chicago also saw drops.

In China, Shanghai, Beijing, Guangzhou, Chengdu and Tianjin all saw the volume of deals drop 40 percent or more, but that was "driven largely by a fall in domestic rather than cross border spending," the report found.

Among international investors, London was the most popular destination, with a 13 percent share, compared to 4 percent for Paris and 3.6 percent for New York.

The biggest source of this cross border capital was Asia, with $55.4 billion invested non-domestically, the fastest growing segment. Capital flowing out of the region increased by 58 percent last year, compared to a 34 percent increase in cross-border deals by Middle East and African companies.

The biggest increases came from Chinese and Singaporean buyers, who are now the most dominant Asian buyers last year, replacing Malaysian funds, the previous number one.

Office projects are the most popular investment target in the top cities, but it's market share shrunk from 48 percent to 45 percent, while residential now represents 26 percent of deals in the top 25 cities.

"While to date many of the largest global players have focused on offices -- arguably the most global and easiest to understand property type across borders -- these players are now broadening their interest to other sectors and in particular, focusing on large scale mixed commercial and residential developments," the firm said.

The firm expects property investment to grow in the next year, with more players looking for new areas for deals.

"Europe will perhaps be the top target for cross border players due to the mix of low risk together with scope for recovery and release of distressed assets," Cushman Wakefield predicts.