The resurgence of rail in the United States has helped turn around the industrial market in California's Inland Empire, one of the area's hardest hit by the real estate collapse.

In the last two years, the Riverside/San Bernardino market has produced the largest growth of industrial real estate construction in the U.S., in terms of a percentage increase. In 2012, more than 8 million square feet of industrial space was completed in the region, compared to only 797,000 square feet in 2010, according to CB Richard Ellis.

"From an industrial real estate a perspective, distribution wants to be in markets with good rail infrastructure," said Jared Sullivan, economist at CBRE-Global Research and Consulting--Econometric Advisors in Boston. "That is why the Inland Empire is so successful."

There has been a major shift from roads to trains in the United States in recent years, analysts say. More than $14 billion has been poured into rail infrastructure, according to a recent Wall Street Journal report, which characterized the redevelopment of North America's major freight railroads as "a building boom unlike anything since the Gilded Age heyday of the 19th Century."

"The (railroads) have widened tunnels, made them taller to allow double stacking, increased the speeds (of their trains) and built intermodal facilities," Mr. Sullivan told the World Property Channel.

Industrial zones in Kansas City, Dallas and other hub cities are benefitting from the growth of rail, but none more so than the Riverside/San Bernardino area. The region was hit hard by the recession, with industrial rents falling 40 percent from pre-recession peak levels, Mr. Sullivan said. The 797,000 square feet of industrial space constructed in 2010 compared to 32 million square feet of new industrial space built in 2006, he says.

Today, with a boost from the railroads, Riverside/San Bernardino is on its way back. Among all of the industrial real estate markets in the country, Riverside/San Bernardino is the ultimate distribution market, which sets it apart from other markets, Mr. Sullivan says.  Los Angeles, roughly 60 miles to the west, is home to the ports of Los Angeles and Long Beach, which together handle 40 percent of the cargo entering the US. Los Angeles has large manufacturers, high tech businesses and a large, local economy. 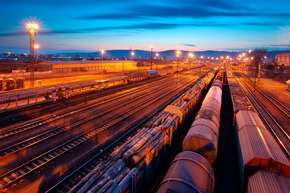 But Riverside is the opposite.  It may not be entry point for goods, but it is a way station, a key distribution market, Mr. Sullivan says. "Goods come in from the Far East on boats in Los Angeles, then are sent to Riverside to get distributed" to the rest of the country, he said.

Unlike in Los Angeles, more goods go in and out of Riverside than are consumed there, Mr. Sullivan says. Riverside's industrial real estate space is largely devoted to warehouses, where goods are stored before being shipped west. "If you're going to build a 1-million-square-foot distribution center, you need affordable land, so you're not going to build it in Los Angeles, because the land there is too expensive," Mr. Sullivan said. "Affordable land is available in Riverside."

But over the last five to seven years, with railroads' investment in their infrastructure, the equation is switching and shipping by rail from the West Coast to the East Coast is becoming a viable alternative , Mr. Sullivan says.