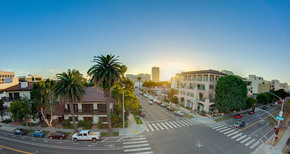 Real Office Centers (ROC), a Newport Beach, California-based real estate company, has taken the concept of executive suites to a new level. The company, which offers fully-furnished office space to small business start-ups, recently opened a new building in downtown Santa Monica that will house as many as 150 companies. The 44,260-square-foot building caters mostly to media, technology and entertainment companies that want to share ideas and equipment in an environment that is conducive to the creative process.

ROC isn't alone in capitalizing on the high rents to the North in the San Francisco/Silicon Valley area, that have left many small, creative, start-up companies without an affordable place to work. "Silicon Beach," as the Venice/Santa Monica area is now known, has become an alternative to Northern California, although even there, rents have been rising, according to a report by Bloomberg News on October 16, 2012.

ROC, which owns two other buildings in Southern California, will have a host of amenities at its newest location in Santa Monica, including conference facilities, a kitchen, coffee bar and furniture. In addition, there is a screening room that seats 50, available bandwidth speeds up to 10 gigs up and 10 gigs down, and a state-of-the-art digital media lab, which includes a green screen (used to make movies), editing bays, and other production capabilities. 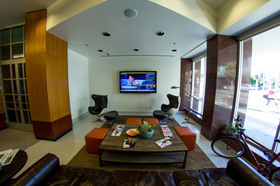 ROC, as the owner of shared-office space, is not like conventional commercial real estate companies, says Ron McElroy, CEO and founder of ROC. The company doesn't just rent out space and equipment, it sponsors seminars three to five times a week on starting one's own company, and tenants at ROC facilities are put in contact with venture capitalists interested in investing in small, innovative companies such as theirs.

"We provide access to funding," although the building is not an incubator, says McElroy. "The open-source environment (in ROC facilities) allows... academics, investors and entrepreneurs to meet in a supportive environment where they can transform their brilliant ideas into capitalized companies," says McElroy.

Leases at a ROC building run anywhere from one month to a year, says McElroy. Although he declined to quote a range of rental rates at his facilities, he said that they are higher than at traditional commercial real estate buildings, but are comparable to companies like Regus, which specializes in executive suites and/or virtual offices.