According to CBRE's newly released Latin America Investor Intentions Survey 2016, the vast majority of real estate investors in Latin America (LATAM) intend to increase their property acquisitions in 2016, with Brazil, U.S., Chile and Mexico as the top country targets.


The 2016 survey was conducted between January and early February, during a time of negative sentiment arising from volatility in China's stock market. The results reveal that 81 percent of LATAM investors plan to be net buyers in 2016. This proportion is notably higher than the 65 percent of investors across the Americas that expect to be net buyers.

Will your purchases exceed your sales in 2016? 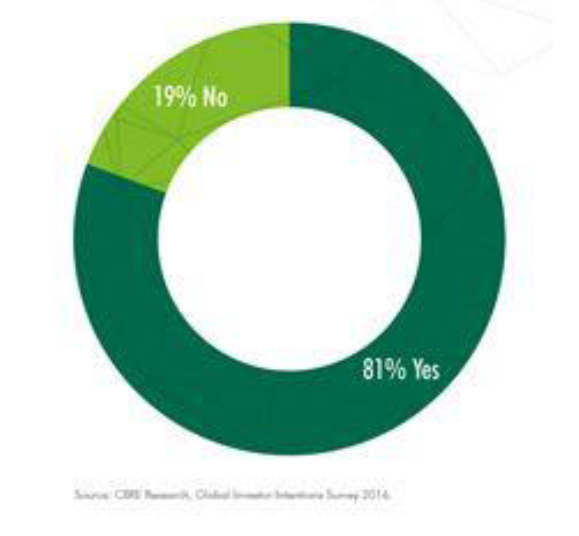 "Lower prices for oil, minerals and other commodity exports weighed heavily on LATAM last year, but confidence is on the up and 2016 could represent a turning point for the region. Investors are actively engaged in the region and viewing 2016 as a year to pursue acquisitions, particularly in Brazil, U.S., Chile, Mexico and Argentina. All of these markets have strong Class A/A+ office supply, upholding the asset class's traditional strength in the region," said Guy Ponticiello, Head of Latin America, Capital Markets, CBRE.

"In the long term, we should see a rise in acquisitions activity as current weak economies-- such as Brazil--regain solid footing, and as the middle class continues to grow in the leading LATAM countries, thereby creating solid gains in real estate demand and more opportunities for investment within the region," added Mr. Ponticiello.

Two thirds of investors named either returns or rental income (38 percent and 29 percent, respectively) as their primary reason for investing in real estate in 2016. In roughly equal numbers, the remaining third cited more strategic benefits--favorable anticipated yields versus other asset classes, real estate's diversification value, and its ability to hedge inflation--as their primary investment motivations.

Office continues to be the most sought-after property sector (35 percent), upholding the asset class's traditional strength in the region. Retail (26 percent) is also being targeted as investors look for steady income streams and the consumption growth potential of a large middle class. Although multifamily is an established model in Mexico and Brazil, overall, there is a large gap in interest compared to North America. This hints at unfulfilled potential for this asset class--particularly in diversification. The hotel market's appeal is similar to that of the more established industrial market. Investment growth in the sector is consistent with its attractive return potential. 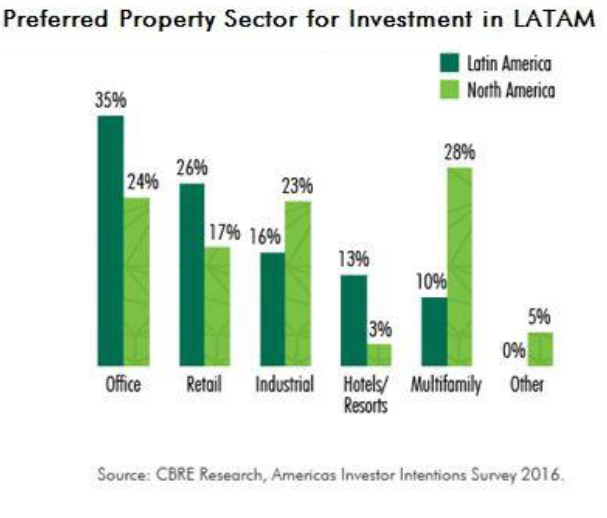