According to CBRE, Asian investors accounted for nearly 20 percent of global cross-border investment in the first half 2015, or $19 billion. The top three sources of Asian outbound capital in terms of dollar value were China ($6.6 billion), Singapore ($4.4 billion), and Hong Kong ($2.2 billion). 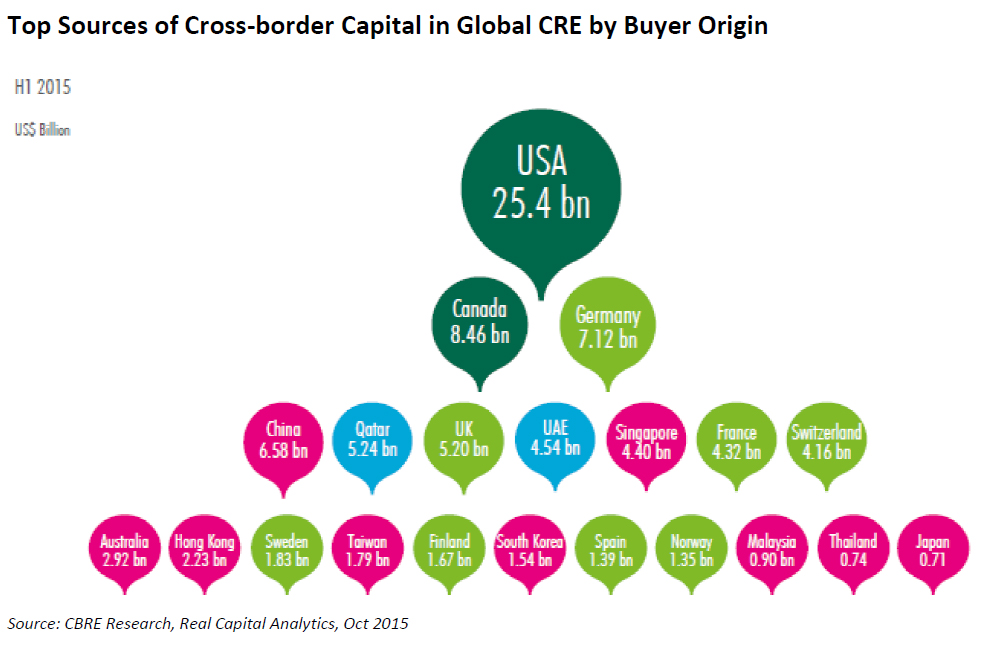 Of the numerous new sources of global capital--which include Canada and non-institutional investors from the Middle East--Asia has been particularly significant due to the size, speed and potential long-term impact brought by the recent regulatory changes in domestic markets. This has allowed many of the local pension funds and insurance companies to invest globally for the first time.

"An unprecedented amount of dry powder is set for potential deployment in the global property markets, mainly fueled by numerous Asian institutional investors still under-allocated in real estate, and facilitated by ongoing deregulation in many domestic markets. Particularly notable are the Japanese pension funds, who are currently sitting on a $1.8 billion war chest and are expected to increase their global real estate allocations in line with international trends," said Richard Kirke, Managing Director, CBRE Capital Markets Asia Pacific.

"Another interesting trend is the strong wealth growth amongst Asian HNWIs. Their above-average allocation to overseas real estate assets as compared to their global peers is an undeniable impetus driving the growth of overseas development projects," added Mr. Kirke.

While investment growth in the US and EMEA increased in H1 2015, Asia Pacific investment levels reflected a decline over the same period. Following a strong rebound after the global financial crisis (GFC), the present slowdown in market activity can be partly attributed to the wider financial market volatility and uncertain investor sentiment in China.

Currency factors like weaker domestic exchange rates and a stronger US dollar have also accentuated the fall in activity in Asia Pacific, particularly as the greenback strengthened against many local currencies such as Australia, Japan and South Korea. Put in perspective, the region registers a more moderate decline if measured in local currency terms.

Dr. Henry Chin, Head of Research, CBRE Asia Pacific, said, "the recent economic deceleration in Asia has led to China, Singapore and South Korea dropping down in the top 20 market rankings in H1 2015. That said, despite the recent volatility in China, it was still the one of the world's largest sources of outbound capital in H1 2015 with $6.6 billion in investments, just behind the US, Canada and Germany.

We expect the recent market correction and Yuan devaluation to be minor speed bumps on China's long-term road to global expansion, and further foresee the region to benefit from increased investments by long-term asset holders and the development of a more balanced sector mix," Dr. Chin added.

Looking ahead, CBRE notes an increase of strategic acquisitions by international buyers with a long-term investment horizon, the so-called "permanent capital". A number of transactions in H1 2015 by these players, comprised mainly of REITS and prominent sovereign wealth funds (SWFs), have reinforced their strong interest in growing their exposure in the Asia Pacific region, in line with their long-term liability-matching allocation strategies.

The change in investor preferences, or sector-rebalancing, is likewise driving a more balanced view of investors' overall portfolio allocation and management. In Asia Pacific, ongoing concerns over declining yields and limited asset availability are fueling the flight to alternative investments. As many of the Asian markets are continuing to develop, more sector-rebalancing is expected in the region in the mid-term, with the industrial and hospitality segments poised to gain from the shift, as well as alternatives sectors such as senior housing and healthcare.