According to CBRE, Chinese investors dominated Asian outbound investment in the first half of 2016, accounting for 60%, or $16.1 billion, of total investment--more than double than that of the $7.3 billion figure in H1 2015. Insurance firms were the most active source of Chinese outbound capital, accounting for 50%, followed by conglomerates (23%), developers (10%) and sovereign wealth funds (9%).

Figures also show that the US remained the favored target region for Asian outbound investment with 52% of the overall total. Subsequently, New York has overtaken London as the top destination for investment among Asian capital in the first half of the year.

There is also strong intra-regional activity within Asia by Asian capital as investors sought to diversify domestic market risks and achieve higher returns. Chinese conglomerates were active in in the first half of the year completing signature deals in Hong Kong and Japan while Singaporean investors remained active in Southeast Asian markets.

"Asian capital, particularly Chinese, continues to display strong investment appetite in overseas markets, especially in global gateway cities, with the US remaining the stand-out target market. With the recovery of the US economy and its solid real estate fundamentals, Asian investors are focused on capitalizing on US assets. Concerns over the market slowdown in their home market have led Chinese investors to seek a safer investment environment which offer higher potential returns," commented Ada Choi, Senior Director of Research, CBRE Asia Pacific.

"Chinese insurance investors led outbound investment among the different investor types as they increasingly seek to diversify their overseas portfolios. Conglomerates and sovereign wealth funds also remain active and play a significant role in outbound investment since there is a huge supply of investible capital in China," said Ms. Choi.

"Asian outbound investment momentum will continue to be strong in the latter half of 2016 as there are still some pipeline deals expected to be completed by Asian investors. Chinese capital in particular will remain active, however, the growth will be at a more sustainable rate rather than a quick acceleration," she added.

The office sector remained the most-preferred asset class for Asian investors, accounting for nearly half of overall investment at 47%. However, hotel properties continued to receive strong interest from Chinese investors, being the second most-traded asset with 33% of overall investment. Experienced Asian capital has also emerged to invest in alternative sectors such as student housing with two major deals completed within the first half of 2016 by Singaporean investors.

"Office investment continues to be an easily understood and managed asset class for most investors. However, as cap rates continue to compress globally, investors are starting to seek out higher yielding opportunities in secondary locations or 'alternative' real estate sectors, such as student housing. Early adopters who have existing experience in outbound investment are now looking at these sectors to diversify their portfolio. It's interesting to see the year's top outbound deals so far have included student housing acquisitions in the UK and US," said Marc Giuffrida, Executive Director, CBRE Global Capital Markets.

"For those Asian investors who are expanding into new markets and niche strategies, we are seeing increasing interest in forming partnerships and joint ventures with local developers or operators. Investors are keen to get scale, and platform investing or joint venturing with local expertise is an efficient way to achieve this, particularly if the strategy required specialized knowledge," added Mr. Giuffrida.

The first half of 2016 revealed that more Asian investors have shifted to invest in portfolio deals, increasing from 29% to 36% year-on-year, in order to rapidly expand their market coverage. Five of the top ten Asian outbound transactions were portfolio deals. Furthermore, there were several big-ticket transactions--worth over $500 million--which closed in the market, accounting for 45% of the overall deals. 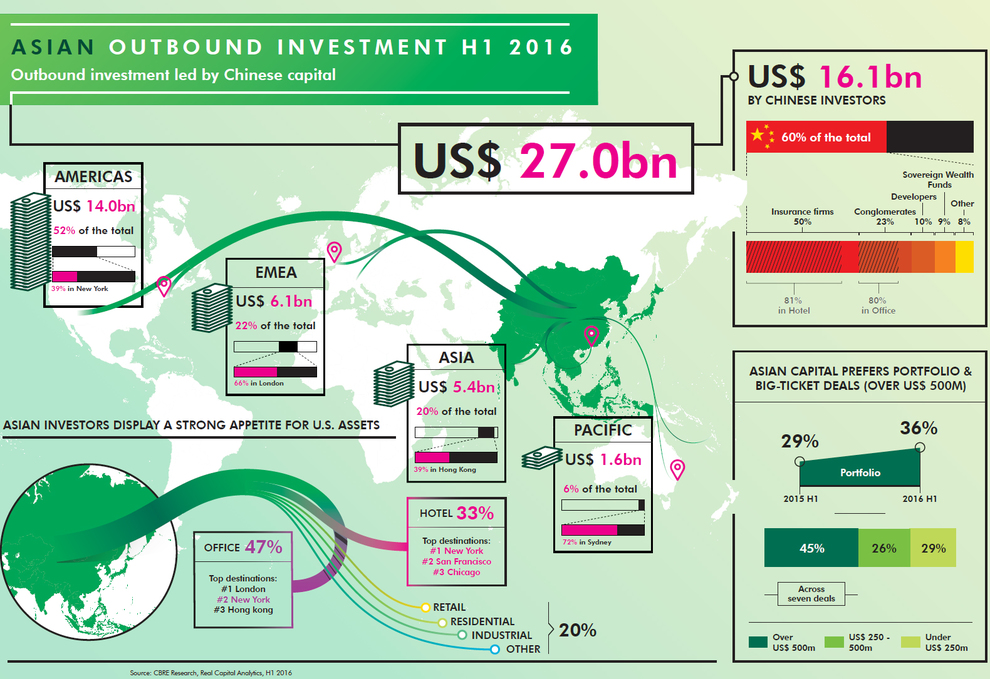