According to Cluttons, the first quarter of 2015 has seen office rents stabilize across Dubai's prime and secondary markets, following a slowdown in the rate of rent increases during Q4 2014, while the industrial market has retained its momentum.

Growth in office rents stabilizes, but pockets continue to outperform

Cluttons' Spring 2015 Dubai Commercial Property Outlook report shows that Grade A office rents grew by 14% in 2014, while secondary space saw a more substantial 24% uplift last year. This strong growth has largely failed to carry through to this year, with a widespread stabilization in rents, despite a steady stream of requirements from corporate occupiers. In the secondary market, rents have been affected by the abundance of stock which continues to trickle through in locations such as Jumeirah Lake Towers and Business Bay. While demand for Grade A space remains diverse and strong, mirroring the growth across the various business segments of the economy, average rents have stabilized. 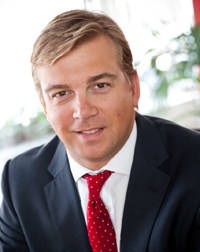 Steve Morgan, Chief Executive at Cluttons Middle East said, "The range of requirements filtering through range between 2,000-25,000 sq ft, underscoring the diversity of business activity. The finance & banking, real estate and business services sectors have been especially active in recent months, with both existing and new market entrants seeking out space.

"Our experience has also been reflected in the results of the latest Dubai Economic Department Business Confidence Survey, where 69% of responding businesses have indicated that they will invest in capacity expansion over the next 12 months. The outlook for business remains very upbeat with over two-thirds of businesses expecting a rise in their level of trading, while 26% expect to increase their head count over the year."

Cluttons' international research and business development manager, Faisal Durrani added: "While rents have stabilized on the surface, this masks the fact that the fragmented nature of the office landscape, which is comprised of micro markets that sit within broader submarkets, means that there are still specific schemes, or buildings, that are in high demand and are therefore still seeing rents creep up. And with the demand pressures unlikely to ease, this is likely to persist. This phenomenon very much mirrors our experience in the market and is reflective of the premium placed on single-ownership stock across the city. This behavior allows the emergence of 'beacon buildings' that break away from the rest of the pack, such as Emirates Towers, or Ubora Tower, for instance. " 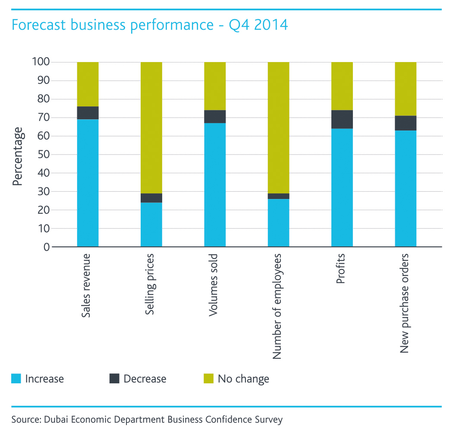 Cluttons' report highlights the performance of these micro markets across Dubai, particularly in areas such as DIFC, where rents vary greatly across the 4.8 million square foot site. The Gate Precinct and adjoining buildings for instance command the highest rents and are the most sought after. The second section of the DIFC which includes third party developers is the next most desirable location. Finally, the third party, single-ownership developments at the other end of the yet-to-be completed retail spine operate in a micro market environment, where higher quality buildings, such as Index Tower and Park Central, command higher rents than smaller surrounding schemes.

Elsewhere, rents are expected to remain stable, or in some cases, such as with some of the strata owned stock, downward revisions are likely to persist. On a more macro level, the prospect of the normalization in global relations with Iran could have huge ramifications for the Dubai office market, however this is still too early to adequately assess. It is however likely that international businesses will hub any Iran operations out of Dubai, should trade relations be normalized with the UAE's northern neighbor. 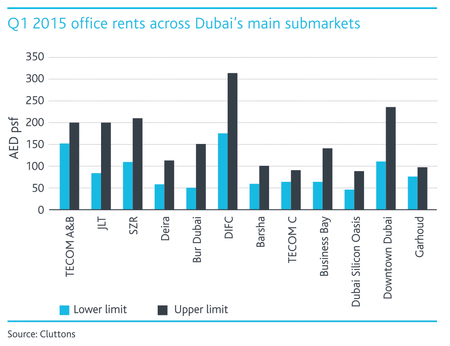 "Dubai's historic trading relationship with Iran stands on the cusp of being reignited following almost a decade of sanctions on the Persian state. Clearly Dubai's economy has weaned itself off dependence on trade with Iran and the economic makeup is very different to what it was 10 years ago; however it is our expectation that global businesses will use Dubai as a launch pad for any Iranian business ventures, should trade sanctions alongside any nuclear energy treaties signed with the permanent members of the UN Security Council. Any benefit to office take up levels in Dubai would be slow to be felt and we are certainly not anticipating a sudden surge from any normalization in relations. It is something we are keeping a close eye on however", explained Durrani.

Cluttons latest report also shows that in the industrial market, rents continue to rise against the backdrop of low supply levels in most of the city's industrial estates. In markets such as Al Quoz and Dubai Investments Park, rents are closing in on AED 50 psf with occupiers likely to start being priced out, which suggests that although rents are likely to maintain their upward trajectory due to the depth of demand, the pace of growth may be lower than of late. 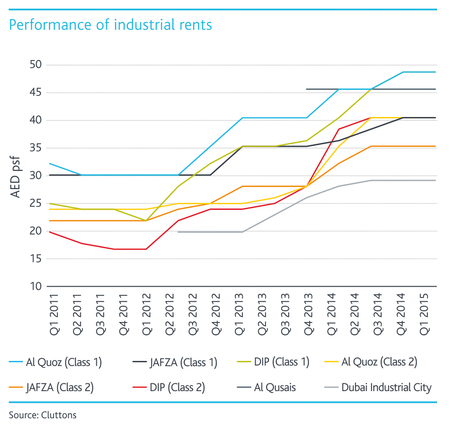 Morgan added, "DIP was one of the best performing submarkets in 2014 and continues to attract occupiers as it operates as an integrated industrial estate, due to the presence of residential accommodation and various retail elements. It remains popular with distribution, fabrication and cold storage occupiers and the lack of stock is driving build-to-suit development on the limited number of available plots".

Elsewhere, with Dubai World Central (DWC) bursting on to the air cargo scene by breaking into the World's top 10 list of busiest cargo airports, Cluttons expects occupiers to continue targeting the surrounding areas.

Durrani commented, "DWC is still recording brisk business, with occupiers rushing to secure sites in close proximity to Al Maktoum International Airport and the Expo 2020 site. There is a high level of demand for land plots in the area, with some as large as 400,000 sq ft. IKEA for instance, has become the latest occupier to set up a presence at DWC and will open its regional 1.1 million sq ft distribution hub in September this year.

"We continue to receive a high number of feasibility study requests for air-side plots as logistics and distribution business increase their focus on this area. Hand in hand with the strong level of industrial requirements at DWC, favorable rental and lease terms are also attracting office tenants from the logistics, distribution and aviation sectors. At Dubai's other international airport, the industrial offering is also expanding, with DAFZA planning 36 new warehouse facilities as it pushes beyond the confines of DXB and expands in to Al Qusais."

Morgan concluded, "The overall buoyancy and strength of demand for industrial space is unlikely to weaken in the near term. And with space in many primary submarkets now in short supply, we do not expect any let up in the upward pressure on rents over the course of 2015. It is certainly a very buoyant segment in the commercial market and this trend looks set to persist over the medium term."