According to a new report by Ziegert, Berlin - Germany's largest housing market - states that condominium prices will keep seeing sustainable growth in the coming years, driven by both growing domestic and foreign buyer demand, mainly in the luxury price tiers.

"For condominiums in the Mitte district, we predict a continued growth in the double-digit range," said Nikolaus Ziegert, Managing Partner of Ziegert - Bank und Immobilienconsulting GmbH. "Within five years, we will achieve a price level of 10,000 euros in the high-end segment." At 4,500 to 6,000 euros per square meter, the district's current level matches that of other downtown districts. 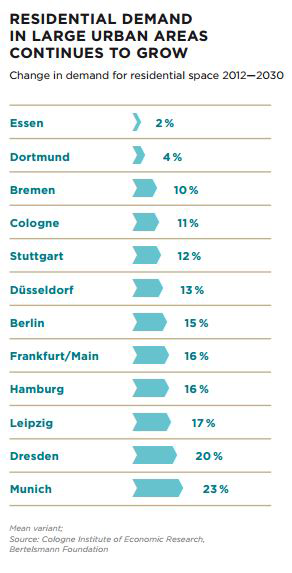 Given the demographic growth of 80,000 people this year alone, the broad-based and stable economic development, and the slow building activity, all of the key indicators speak in favor of a sustainably positive price trend on Berlin's housing market. "For the time being, the city offers potential for opportunistic investors as well as for buyers with a long-term horizon," said Nikolaus Ziegert as he summed up the situation. "Compared to London, Paris or Munich, Berlin remains quite affordable and is simultaneously barely exposed to the risk of deteriorating prices."

Ziegert sees great opportunities for buy-to-let investors. "Berlin is a city of tenants. While Berliners are beginning to warm to the idea of buying property, many residents will keep renting even if the currently low interest rates would actually put homeownership within reach for them and even if buying is the far more affordable option." For new units in Mitte, Ziegert projects a rental yield of over 4 percent. Rents in period buildings have been capped by recent legislation. Earnings from new units, by contrast, can be pushed beyond 6 percent, for instance with high-spec furnishings. "Over the past years, Berlin has become more international. This has in turn boosted demand for furnished apartments, especially in the high-end segment," said Ziegert.

From China and Russia, but above all from Israel and Switzerland

International buyer demand has noticeably diversified for Berlin's biggest estate agency in recent months. New groups of leads, such as Chinese business people, are a welcome addition to Berlin's market without dominating it. "For example, we sold four out of 64 condominiums just 600 meters from the Brandenburg Gate to Swiss leads, others to buyers from Australia, China, Russia, Italy, the UK, France, Spain, Luxembourg and the United States, so that we had an international share of 40 percent at the end of the day." Moreover, there are buyer groups that few estate agents have had on their radar so far. "New Zealanders and Sweden love to buy new-built units in Friedrichshain. You also need to remember that quite a number of young Israelis have come to Berlin over the past two or three years." Last year, Ziegert served buyers from 57 different counties. Despite the diversity, demand by the international clientele focuses on the downtown districts.

The number of transactions upward of 5,000 euros per square meter grew by 46.5 percent in 2014. "The effects are to some extent explained by new unit sales and higher market prices," said Ziegert. "Specifically in the price bracket around 5,000 euros, there is now quite a number of offers with fit-out features that, while satisfying a high-end standard, are a far cry from luxurious." In Ziegert's eyes it makes no sense to consider anything below 7,500 euros per square meter true luxury. For the time being, the demand for pricey apartments in Berlin remains limited to the coveted neighborhoods of Mitte, Prenzlauer Berg, Kreuzberg, Schöneberg, Zehlendorf, Charlottenburg and Wilmersdorf. "These are locations with a broad-based supply," said Ziegert. Genuine highlights such as the penthouses created by Daniel Libeskind in Mitte tend to be picked up as soon as they hit the market.