According to CBRE's 2015 APAC Real Estate Markets Outlook report, driven by rapid urbanization, demographic growth, the expanding middle-class and increasingly wealthy households, the economic growth in Asia Pacific will remain ahead of the world average in the coming years.

These trends translate into stronger demand for high quality property especially suburban retail malls and residential housing. Asia Pacific will continue to outperform in 2015--with Oxford Economics projecting 4.4% economic growth, compared to 2.9% globally. Meanwhile, CBRE estimates that overall investment turnover in Asia Pacific will increase by 5% year-on-year to US$118 billion in 2015. 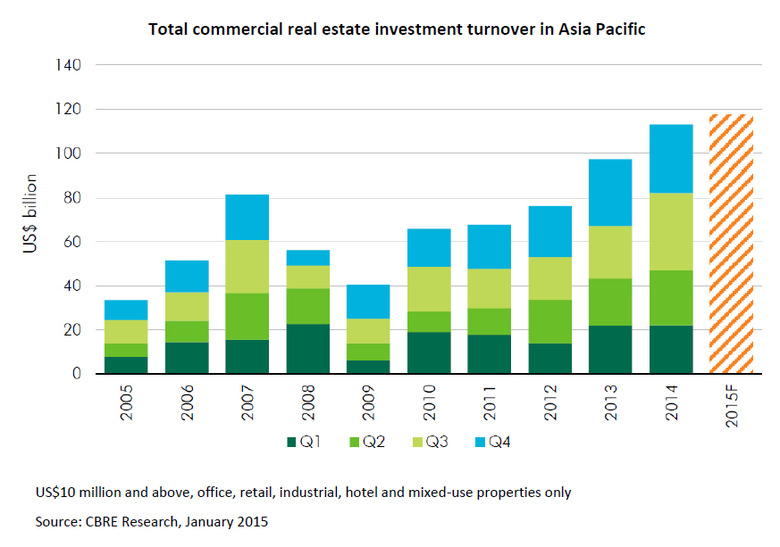 "CBRE doesn't expect most markets to experience significant upward pressure on interest rates this year due to the fall in inflation and the continued QE program implemented in the Eurozone and Japan. The recent steep decline in energy prices has also diminished the pressure for short-term interest rate hikes. Policy makers are more inclined to lower interest rates to support their economies, with notable recent examples in China, India, South Korea and Australia. Securing low-cost financing will give investors ample opportunities to invest in real estate," said Dr. Chin.

"Furthermore, the combination of high liquidity and the lower probability of interest rate hikes provide landlords holding prime assets the support to maintain pricing at current levels. Landlords will be reluctant to dispose of assets at discounted prices," he adds.

Current corporate and investor confidence in the region remains intact and is supporting firm demand from both real estate occupiers and investors. CBRE expects rental and capital value growth of around 2-4% for the office, retail and industrial sectors in 2015:

Growth will continue to diverge across the region with markets undergoing different economic cycles. One example is Japan, which enters 2015 positioned at the beginning of an upward cycle on the back of the depreciation of the Japanese yen. Attracting a surge of tourist arrivals in 2014 has supported the export growth--industrial production will likely increase, with office and retail rents already expected to grow. Japanese corporations are also considering relocating their production from overseas to their home country, which will boost the economy even further. On the other end of the scale, China's economic growth is slowing to 7% and is expected to ease further to around 5% by the end of the decade. This slowdown is mostly government-led as authorities focus on restructuring the economy. Despite this, the main focus of corporate expansion in 2015 will remain in this market.